Last weekend I dropped into the last days of the Climate Camp being held at Lake Liddell recreation area near Muswellbrook in the Hunter.

It was held here because near Bayswater Power station where a new one, Bayswater B, is threatened/promised, and which needs serious protesting against. An insanity, flying in the opposite direction of what is the publicised aim of Cancun. Has Mr Combet mentioned ‘coal’ yet? 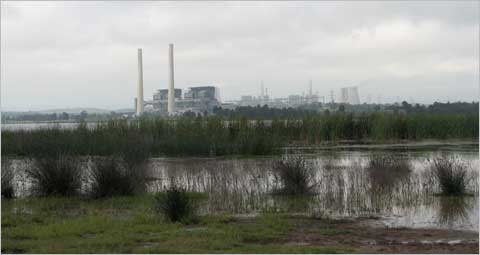 Inspirationally, the Camp was just across the ‘lake’ from the Liddell Power Station and through the days and nights coal trains roared and rumbled along the nearby lines to the coal loader at Newcastle, the world’s largest coal exporting port.

They seemed non-stop — as they will actually be when even current expansions and approved mines get going — and they were as loud in that wide valley as a jet engine on the tarmac.

Some mines here and to the north and west do supply the two Hunter power stations, but most of the coal is shipped overseas to fuel climate change — they get paid more for that!

On Saturday night a wild and wet storm tested all the tents and made gumboots or bare feet de rigeur. They’d had a great week, I heard, with workshops and speakers and coalfields tours, where people from many states and even New Zealand  swapped information and drew strength from, as one participant said, this ‘family of environmentally concerned persons’.

I was delighted to meet in person two of the interstate activists who had helped me on my coal research trips: Sonya Duus, from Bimblebox in Queensland and Frosty from Bunbury in Western Australia.

As always, the last day was to be a day of community action and many Campers had put much effort and originality into the costumes, the placards and banners, and the songs and rap raves to brighten up the protest walk. 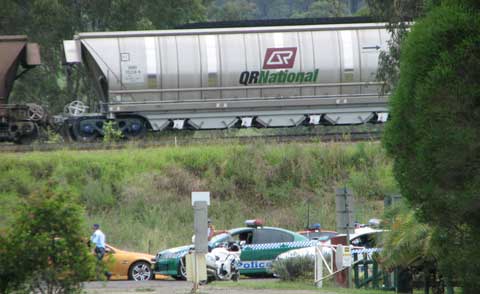 Many more folk turned up just for the walk; the police cars waited at the gate, the sun came out, and the colourful crowd of several hundred set off, to drums and whistles that stirred my heart, as if they were truly going into battle. As they were, for all of us and the planet.

I was staying behind to help others prepare food for them when they returned — which would be much later than expected. 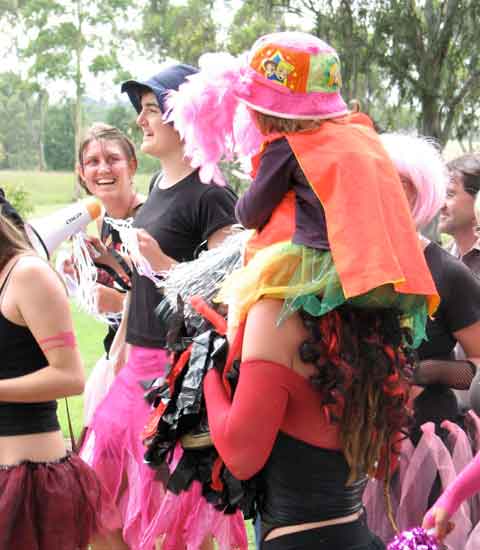 All ages were there, from babes and toddlers to those in what would have to be called twilight years. Minibuses  — or obliging mums and dads — were there to transport those not able to walk far.

Once they were on the road, police cars in front and rear shepherded them along the road beside the rail line. As they went over the hill, in such a ‘rural’ setting, the protest looked as out of place as the coal trains and conveyor belts do. There were few police, as they probably were expecting no ‘action’ until the walk neared Bayswater. 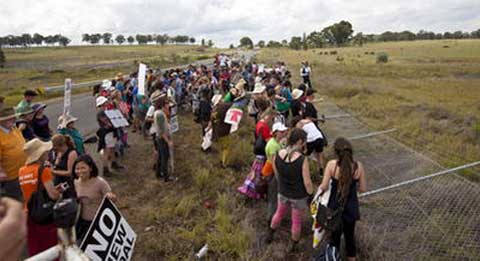 Instead, only a few hundred metres down the road, the line suddenly veered off the road, flattened a pre-cut cyclone wire fence, and 150 headed down to the rail loop that serves both power stations.

Some locked themselves on to the tracks, others just sat and occupied the line.  The rest stayed up on the hill outside the now-horizontal fence and gave encouragement, through hot sun and then heavy rain. 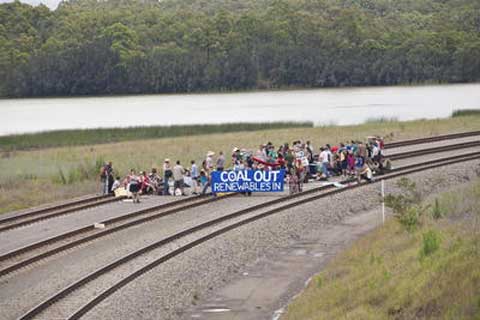 In all, and over many, many hours, late into the night, 73 people were arrested, for offences including enter and remain on rail infrastructure, failure to comply with police direction, and enter and remain on enclosed lands. Hardly dangerous or threatening behaviour, compared to the lethal harm the government will cause if it allows this new power station.

We don’t need it, when we have perfectly viable plans for moving to a renewable energy future – right now — like Beyond Zero’s Stationary Energy Plan.

These people who put themselves peacefully but firmly up against the law, and likely up for serious fines, did so to gain the attention of the public and the government, both of which seem to have let this greatest threat to life on earth just slip into the background.

They did it for your kids– and all the kids to come.

The last two photos are from the Herald story.