In Western Australia I drove about 200km south from Perth to spend a few days in the town of Collie, the state’s coal mining and coal-fired power base. Like many towns founded in the late 19th century on underground coal mining, Collie is proud of its history.

However, I fear the that townspeople have not realised the vast difference between impacts from those old mining methods and the large open-cut mining employed since the 1990s, now much in evidence — but only if you drive 10 minutes out of town.

Collie has two companies, Wesfarmers Premier Coal and Griffin Coal, the latter under administration, mining mainly to supply the four privately owned power stations, more of which are planned to to open or re-open in the next few years. Collie Basin is set to remain the carbon powerhouse we don’t need.

As I first approached Collie, one obvious difference to the similarly coal-dependent Hunter Valley was the heavily forested, hilly surrounds.

Collie itself is a nice town, with all the services you’d want. Residents can go ‘down the hill’ to the city and port of Bunbury for anything else — just as ‘flatlander’ workers come ‘up the hill’ to the mines and power stations. However, the Collie coal work force has roughly halved in the almost 20 years since the mines went open-cut and mechanised.

The mine landscape of overburden, dust mountains and vast stepped holes was familiar to me. There are farms under current impact right near these mines, which are expanding or moving operations along and so threatening more properties with unacceptable noise and dust. And of course there are the people already forced out, those who used to live where now nothing can.

From anecdotal evidence, I’d say that health damage from infrasound is likely to be occurring.

The other familiar aspect was the milky air. Pollution? It was winter and most Collie homes have wood fires, plus there was hazard reduction burning in the forests, following an unusually dry winter. I accept what the locals say, that it doesn’t look like this in summer.

However, if Collie Valley holds the winter smog like this, it has inversions and is highly likely to also hold the fine PM2.5 dust particulates from those uncovered mines and those high coal-fired power station stacks. Plus the uncovered coal trains go right through the heart of town.

Since I was there, a 2008 Collie Basin air quality study has just released its PM 2.5 section and yes, there were ‘exceedences’, but hazard reduction burning seems to be getting the blame. Ongoing monitoring was recommended, however, plus particle analysis.

Collie itself doesn’t seem to want to know. Afraid of what might happen, jobwise, if health damage proved that mining might be stopped? How about insisting on better practices right now from mining and setting up cleaner industries for the future of Collie?

Instead they are planning a coal-to-urea plant! That should spice up the airborne particles with plenty of nitrogen and put Collie folk on a knife edge, as many are very worried about the dangers inherent in storing ammonia. They don’t mean ill-health; they mean almost instant and widespread death for the people of Collie. They have no faith in the assurances of Perdaman, the company wanting to establish this industry — who only estimate seven deaths at worst case scenario.

So that’s all right, then? 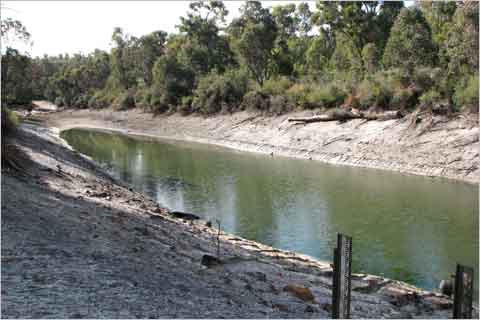 The other serious and totally unsustainable issue here is the dewatering of the area’s groundwater, estimated at about 1m overall drop across the Collie Basin, but up to 50m below the pre-mining water table in places.

The pools in the branches of the Collie River are not likely to join up soon and the outlook for what might still live there is bleak. Salinity is a fact of life.

The mines are supposed to treat their used water and put it back but it’s still too acidic. While also allowed to pass on their water to the power stations, the sums for overall water allocations do not add up.

With a drying climate and more water-hungry power stations to come, there will simply not be enough water for Collie industry or its people.

Who isn’t joining the dots — and why? 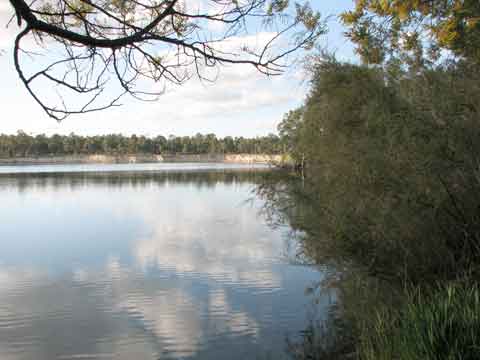 Another water issue for me was the water-filled old open cut void, Stockton Lake, a popular spot for camping and waterski-ing, and more are promised.

The tourist brochure warns ‘As the lake is a disused coal mine, the water is more acidic than other natural lakes and skiers are advised to limit their time in the water — especially those with sensitive skin. Swimming is not recommended.’

‘Yeah, they say they’re a bit acidic,’ said a local, ‘but I’ve swum in them for years and my legs haven’t fallen off yet’.

H-hm-m. Shades of The Simpsons?

What about the heavy metals this acid causes to leach out — lead, arsenic and mercury —  the effects of which may not show up for decades?

I liked Collie, and I am sad to see its head-in-the-sand response to the health issues and future job challenges, but they are taking their lead from the state government. A few well-informed local voices continue to tell it as it is, but, unlike the response to the boy who dared cry out that ‘The Emperor has no clothes!’ most of the townsfolk in earshot here would seem to be blocking their ears.