In one week I have been visited by three echidnas, two of them at the same time. 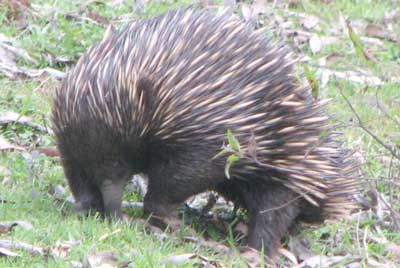 From the orchard I saw what looked like a small dark wombat moving up the slope just outside the fence. Drawing closer, it proved to be the biggest echidna I’ve seen on my place. Its spines were darker at their bases, so less obvious, and at first I thought it had few, like a young one. But this fellow was a veteran. 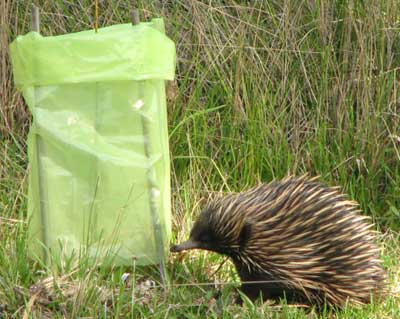 As I ran to the house to get the camera, a movement within the yard, just above the orchard, caught my eye.

There was another echidna, lighter coloured and smaller! This cute one was doing the rounds of the inside of my house fence, poking its snout, or beak, into the ground as it went. A female? 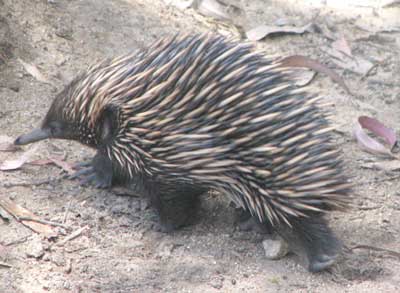 And then a few days later, from the kitchen window I saw one lumbering towards my yard gate.

It wasn’t as big as the first one, but was darker than the second. As it crossed the track, because it was walking on bare dirt, I got a better look at its feet and powerful digging claws, especially the extended rear one, used for scratching their fur amongst the spines. 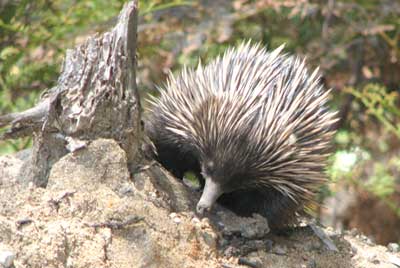 Then it climbed an upturned tree root and began poking about in the hard clay. Look at the bristling power and fabulous arrangement of those spines!

I am fascinated by these strange egglaying mammals, or monotremes. How lucky to be able to have them just drop by, to share their habitat.