Gunnedah is the main town of the fertile, well-watered NSW Liverpool Plains, which grow much of our grain and seed crops, such as wheat, canola, sunflower and sorghum.

These flat lands are dependent on their underground aquifers and their even surface drainage. Longwall mining will wreck both.

It would be madness to mine there, so why should companies like BHP Billiton explore there? 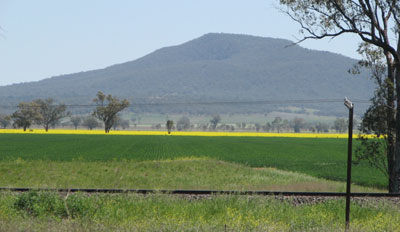 BHP’s plans came to a halt when local farmer Tim Duddy simply wouldn’t let them onto his property at Caroona.

The court ordered him not to obstruct them, so all his neighbours did instead. They’ve been doing so for 6 weeks and they don’t intend to stop.

On Tuesday 16th September myself and 8 other coal-inflicted Hunter people went up to support the locals in a rally organised by the Caroona Coal Action Group.

They held it outside the Civic Centre where the Gunnedah Basin Coal Conference was being held.

As we were there from 8 am, most delegates must have gone in the back way, as we saw very few, although I later spotted some peeping through the glass front doors at the apparently scary protestors. 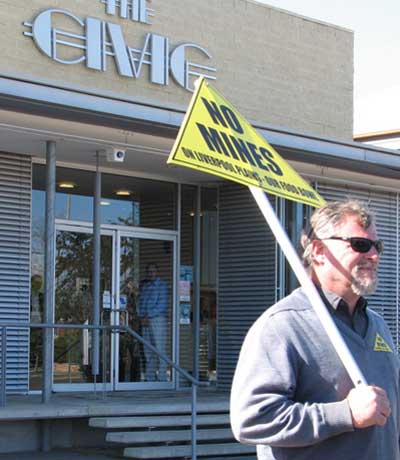 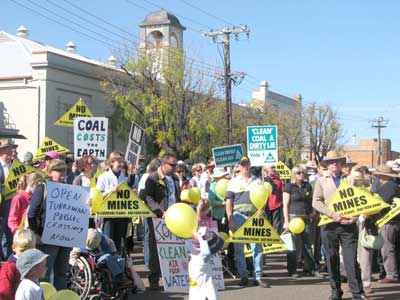 The rally was not your usual activist gathering; not a dreadlock in sight. Here we had conservatively covered books holding highly effective radical activism between their covers.

There were establishment farmers in their best moleskins and Akubras, their elegant wives equally adamant in their protest; there were worried rural families who’d thought they had a future here; there were babies and dogs and little old ladies bristling with No Mine stickers.

It was clearly a community sticking together, standing their ground against the Big Multi-national, saying ‘No’ with all the authority of People Power. 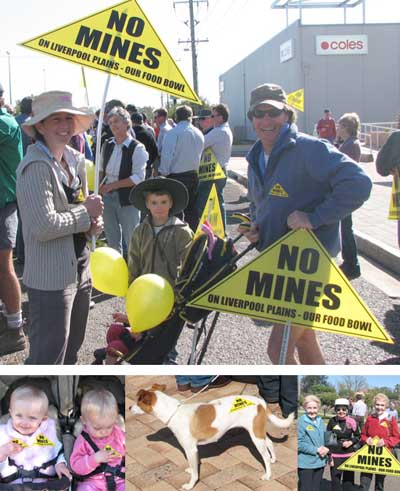 The Nationals’ Trevor Kahn was disappointing in that he didn’t say much of substance and told the rally that rather than putting up signs from here to Tamworth they had to take their protest to Macquarie Street, to the government.

My immediate thought was,’ Hang on, he’s in Parliament, he’s in Macquarie Street: why isn’t he taking it there?!’ 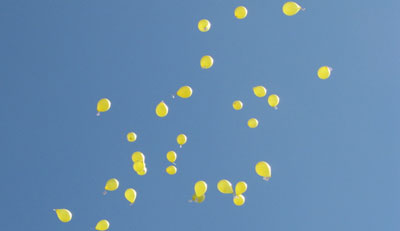 Everyone held tagged yellow balloons, and once the speeches were over they were released, to float where the wind takes them.

The point being that coal dust would follow the same path, as we in the coal-ravaged Hunter know; when the group did this at their last rally, one balloon got to Kempsey, 235 kms away over near the coast, in 72 hours.

Local singer/songwriter Steve Charles has written them a battle song, called ‘Bring it on’, and I was quite moved as he sang it and people began to join in.

When the rally ended we bumped our way out over the gravel roads to the blockade at Caroona, near the Doona State Forest, where locals are taking it in morning and afternoon shifts of four.

An old Mercedes has somehow died right in the middle of the road BHP would need to use, and large logs have somehow fallen beside it. 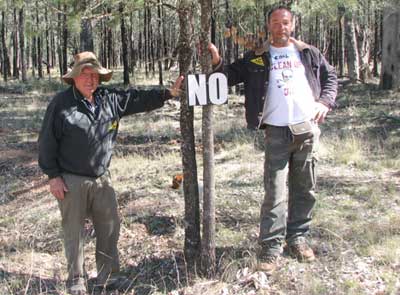 George Clift recalls how he just said ‘No’ to the first BHP representative who tried to pass.

He’s been given a sign to commemorate the ease and effectiveness of that small word by Rob Carroll, from the Mudgee area, who’s been saying it for some time to his local mining giants, but unfortunately too late to do more than annoy them.

The beauty of this Caroona action is that they are stopping the mines right at the start, saying they want an independent water study before any exploration is begun.

Of course BHP would be allowed to mine it after exploration, regardless of the value of the land and aquifers, under current government ‘planning’.

The token study BHP would do then would naturally conclude there’d be no adverse effects, and, just like the tragic Hunter Valley, all mining would be under ‘strict environmental guidelines’. 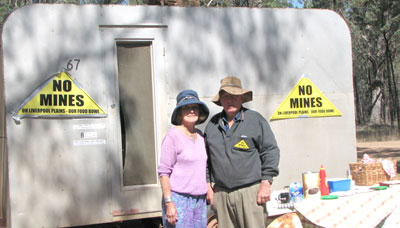 To sustain the troops at the blockade, the camp fire is kept burning and the tea and coffee brewing in true country style.

George’s wife, Tommy, was manning the billy when we called by, in a most ladylike way.

These people are farmers with work to do, so giving up half a day at a time is a lot to ask, yet there is no shortage of volunteers for the roster.

Nor are they letting BHP pick them off one-by-one with empty assurances and offers of riches. Wonderful, inspirational stuff, this People Power!