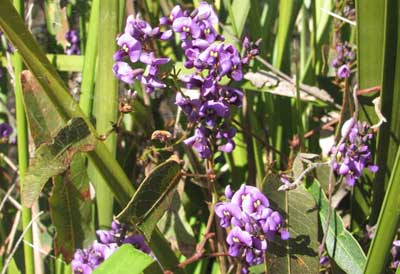 Even before Spring had officially sprung, the forest began to deck itself in royal purple.

Twining up saplings, threading through the spiky clumps of Lomandra and Dianella, or just running for glory through the grass — the Purple Coral Pea, Hardenbergia Violacea.

It’s also called False Sarsparilla, which doesn’t seem fair, as it’s just being itself, as if that isn’t gorgeous enough. The tough, heavily-veined leaves you can see here belong to it. 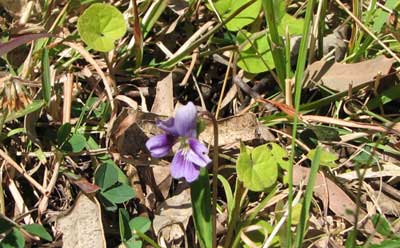 Much less showy, in fact so shy that it takes a lot of careful and close looking to find it, is the Wild Violet, Viola betonicifolia.

It’s also called the Purple Violet, which seemed a bit silly to me, but then they could hardly say the Violet Violet, could they?

It has distinctive long sword-shaped serrated leaves at the base of the single stem, if you’re looking out of season: you can see two in this photo, at roughly 12 and 3 o’clock.