Re-visiting my friends with the peacocks, I struck these quite ridiculous birds at their show-off time, which is also when they make more noise — at times like a cat ‘caterwauling’, at others like a donkey. Never like the divas they dress up as.

The white peacock was the first to display for me —  for the aged white peahen actually, but she walked straight past and ignored him. How she could I don’t know, as he was spectacular in fine tulle and — well, feathers!

But I guess she’d seen it all before. 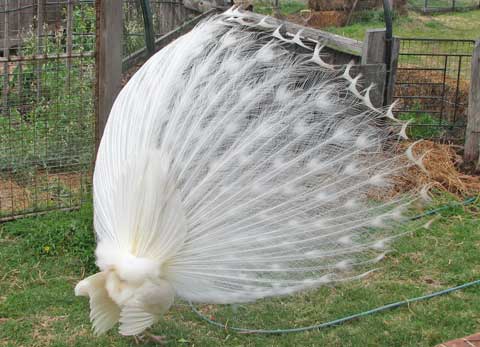 He turned towards her dismissive back, fanning his tail forwards right over his face as he did so. It was such a showgirl rear exposed, pleated silk and ermine trimmed knickers! 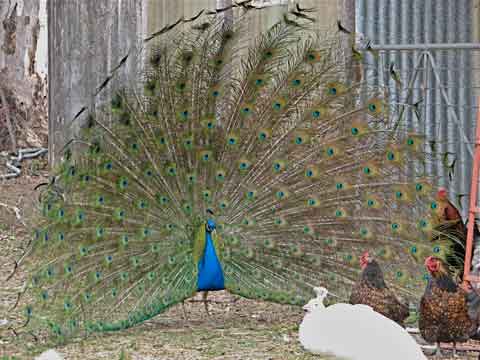 The next afternoon I found the blue peacock strutting his stuff before the chooks, who were slightly more interested than the peahen – but not much.

I was enthralled. Just look at the fine detailing along the bottom edge of the fan, like a row of ‘eye’ sequins!

He too tried to catch her attention by fanning far forward, then slowly rotated. It looked hard to keep his balance with so much out front.

I realised that the stiffer short fan of grey feathers act like a brace. And then he began to shimmy, to vibrate the whole shebang so the quills audibly rattled! The soft white and black fluffy rear layers shivered very sexily.

But the peahen hadn’t stayed for the show. 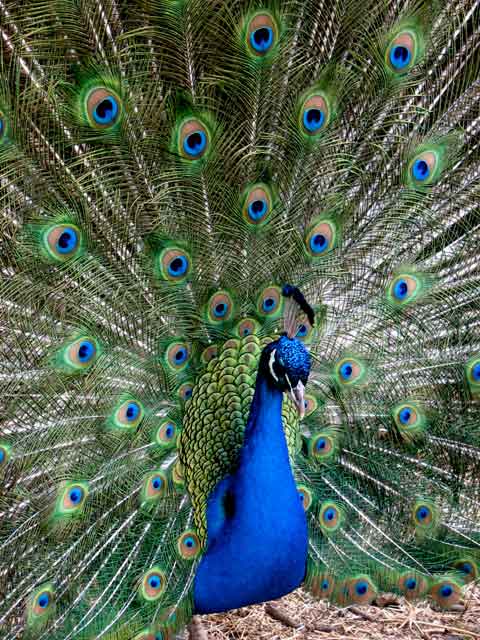 I felt so sorry for him; all this effort and nobody but me to applaud. Before he packed it away into a long trailing tail once more, I told him how incredibly beautiful he was.

Still ridiculous finery to be wandering about a chook yard in — but I am in awe of the exquisite design detail and colour! Who could have dreamt up such a creature?