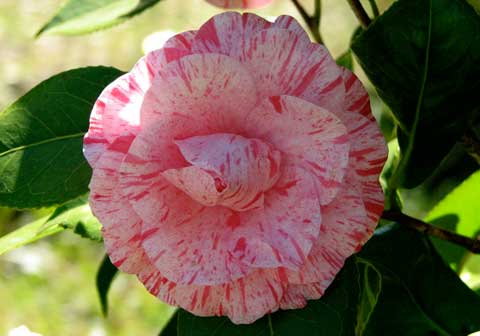 Just spring, and another of my old-fashioned camellia bushes has come into bloom. Grown from cuttings taken from the garden of an old house in Port Macquarie, this one is lolly pink, streaked with strawberry. A candy camellia. Ain’t she sweet?

In a less domesticated part of my yard, three native plants have formed a dainty trio. A young Omalanthus tree, often called the Bleeding Heart Tree, only as tall as myself, has been wreathed in thin vines: the clinging bridal shower of Clematis aristata, Traveller’s Joy, and the purple pea highlights of Hardenbergia, Native Sarsparilla. The tree I propagated and planted, the vines are surprise gifts of nature.

The lime green leaves of the Clematis are echoed by the long budding racemes of the King Orchids (Dendrobium speciosum, var. hillii) . A spectacular native orchid, it will be even more so when the flowers are open. 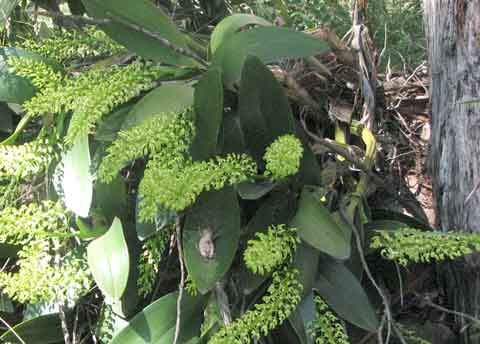 Found in my rainforest gully years ago, the increasing weight of this clump had probably caused the casuarina branch on which it had grown to come crashing down. I relocated it to rocks at the base of a stringybark in my yard, where it has fleshily multiplied since.

Whoever said the Australian bush is drab?!!