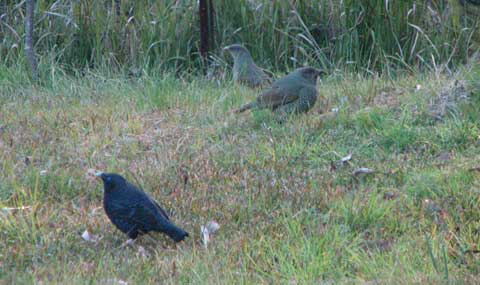 I see plump female Satin Bower-birds in my yard often, and hear them even more often — a creaking sound rather than music. The greeny-brown females are well camouflaged.

I rarely see their partner, the handsome bluish-purplish-black male, and I have not yet found his courtship bower in the adjacent rainforest gullies, but he must have one.

I don’t leave my pegs out, so can’t even tell if he’s been pinching my blue ones for decorating that bower, as they love blue objects. Until the chicory and borage flower in my vegetable garden, I don’t have any blue blossoms for him either.

Yet the other morning, there he was in the bottom corner of the yard, below the  30-year-old bay tree, which offers dense cover for them if need be. He and two ladies were poking about in the grass.

I could see his bright blue eye and his green-tinged bill. He seemed shyer than the other two and kept to the shade or behind the small lillipillis planted there, so I couldn’t get a photo of him with the sun shining on his iridescent plumage, as I wanted.

Then on to the scene strolled my Wood Duck couple on their early morning rounds. For about five minutes the two species shared that corner, the male Bower-bird staying in the shade, where I suppose he is better camouflaged, more like in the rainforest.

Then something outside my senses startled them all. With a single squawk the wood ducks took off  to their safe haven in the middle of the dam. The bower birds all hopped in under the bushy base of the bay tree.