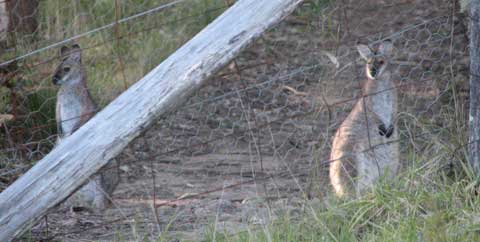 When you live in the country it’s always a boon to have a passenger  to act as as gategirl or gateboy, to open the many gates so you don’t have to yank on the hand brake and get out to do it yourself.

I couldn’t wait until my very smart granddaughter Jess was old enough to take on that role, in being tall enough to reach.

City folk may not realise that every gate is an I.Q. test; they are all different. Even if they are using the same basic mechanism for once, the swing of the gate and the distance of gate from post will require a whole new set of possible solutions to the problem.

Worst of all, the driver is watching and waiting while the gategirl or gateboy wrestles with the chain, the gate and the embarrassment. Much mime play generally goes on while the gate’s idiosyncrasies are attempted to be explained through the windscreen.

However, last  week, early one morning, these two shy girls were sitting so calmly and for so long outside my house yard gate that I felt they were waiting to be let in. Too small to be expected to do the job themselves, gloved hands meekly crossed like the best-brought-up convent girls, naught but an ear twitched as they patiently propped there.

They gave up eventually, but thankfully not before I took their photo.