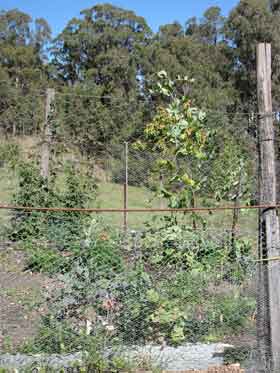 My vegie garden has been so variously girded and further girded that I felt it was a fortress.

It has fine aviary wire netting dug in at the base – against small mammals like bush rats; a moat of gravel against the kikuyu; is swathed to head height in floppy chicken wire for horses (originally) and for possums; and has an added aviary wire overlay to varying heights from about 700mm to 1metre – for the snakes.

I had been at ease in there for weeks as I weeded and planted for Spring, as I could see that no critters were lurking in there. After having been away during the wild dust storms lately, the spring growth in there was looking sad and dirty. I went to hose it.

As I touched the garden gate I saw my red-bellied black snake stretched out comfortably on the earth of my vegie garden, threaded amongst the self-sown rocket seedlings in front of my garlic.

How had it got in — and could it get out? It surely could not have got through the aviary wire??!! (which you can’t see here but is on the outside of these layers of netting.)

As I watched it slither in and out of my once harmless young vegie rows, erratically rearing up to poke at the netting, I indulged in a longish bout of teary despair. Fearing it was trapped, I phoned a snake-wise friend who said my aviary wire was nowhere near high enough and yes, the snake could have climbed up the netting until it reached the larger holes. I hadn’t imagined it would make such an effort — why would it bother??

I was advised to open the gate and watch until it went out. But when I returned I couldn’t see it; nor could I on each half-hourly check that afternoon. It must have got out.

Next day I saw it on the grass elsewhere in the yard — but I am still unable to go into the garden until I can afford to add a new higher layer of fine netting.

But how to be sure the invader is outside the fortress when I do?