Last Thursday I got up at 3 am and set out for Gloucester, to join a 5.30 bus heading to the AGL AGM in Sydney.

In case you don’t know, AGL snuck in the first CSG fracking rig last week and have set up a screen to do it in secret in the once-rural paddocks on Fairbairns Road.

This AGL project was hastily approved and inadequately researched, and is inappropriately sited in the beautiful, scenic and historic Vale of Gloucester, gateway to Barrington Tops, from whence their clean rushing rivers come. These waters and the aquifers beneath are also the supply source for the Manning Valley downstream.

Hydrologist Professor Phillip Pells, not an opponent of CSG extraction per se, has said that Gloucester is the wrong place for it. The locals want the project stopped until the proof of this or otherwise is shown; until the fracking chemicals are tested, despite AGL assuring us they’re much like what’s in salad dressing; until the disposal of its wastewater with all its nasties, not ‘just salt’, is sorted; and until the 2-kilometre CSG exclusion zone that applies to Sydney suburbs is bestowed on the people of Gloucester.

Last time I looked, their bodies were the same, so the health impacts will be. Not fair, Minister Roberts.

Outside the AGM, after rallying talks, we cheered in the shareholders and waited to cheer them out, hoping that by then they would have learnt more about the damage their company is about to do from CSG, when it could instead be full on into renewables.

Six or so Groundswell Gloucester and Manning Clean Water Action Group members — respectably suited up — used proxy votes to address the meeting with facts that AGL does not give. In fact, they emerged gobsmacked at ‘the lies’ given out instead. Shareholders were advised by our locals to think about the potential liability from harm caused by this CSG project. 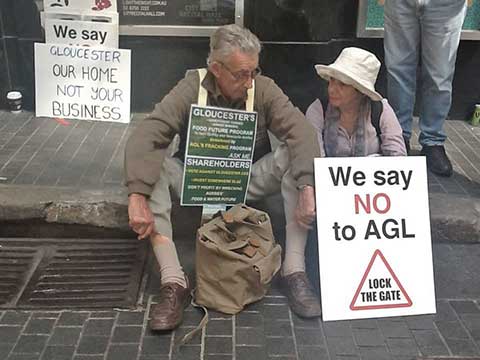 Here I am resting in the gutter alongside Ken Johnson of the Gloucester Project, which plans for Gloucester as a future regional food bowl. Ken’s 80, I’m 66, and the indefatigable Bill Ryan, only 90, was there too. Back in Gloucester, Ken’s wife Marnie was being cut out of her neck lock on the AGL main access gate as we spoke.

Dan Lanzini, meanwhile, was inside and locked on underneath the actual fracking rig. I’d met Dan up at the first Pilliga camp, when he and Dayne Pratzky visited to help kick things off against Santos. 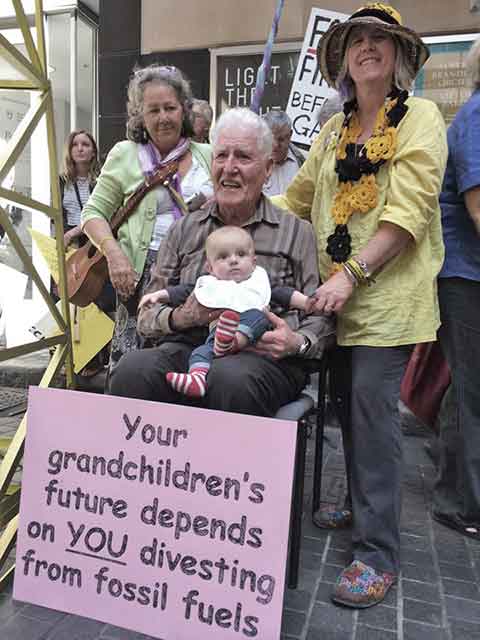 My offer to ‘do’ something to show support was accepted, as was that of my bus seatmate and newfound friend, Alison. The bus got back about 7pm and Alison’s friends Brad and Thomas (Brad had been one of those addressing the AGM) generously put us up for the night and we set our alarms for another early start, 4 am.

After the last three days of protest action, there was a large police and security presence in the area and waiting at the main gate. For some reason, the frack rig workers didn’t arrive that day: results already? 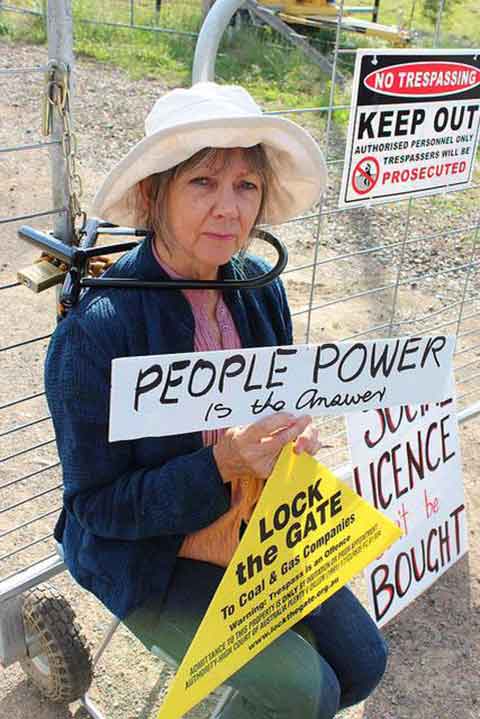 So I had to quickly lock on to the next gate, right under the ‘eye’ of the security camera, but no burly security personnel. My ‘buddy’ Alison and about 14 locals stayed with me in support. The second round of police to visit issued me with a notice to appear in court — and left me to stew — or fry, advising that they would not be sending for the rescue team to cut me off.

After a morning of media — interviews from within the neck lock are pretty effective! — eventually the locals’ opinion was that no more could be achieved there that day. 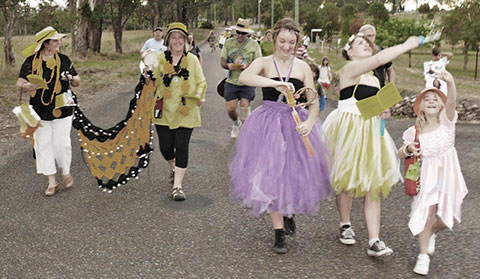 If you want to know more and to help this community in any capacity — you don’t have to lock yourself to a gate! — please visit the Groundswell site — One example was the Knitting Nannas’ Lantern Walk (of Shame) on Friday. As you can see, non-nanna blokes and fairies are welcome!

An approved protectors’ camp on farmer Ed Robinson’s property just up the road is at last in operation as of today, Monday 27th, making it easier for visiting supporters like me to help out. (Ed also addressed the AGM.)

Please spend some time there to help swell the numbers and stop the fracking.

All photos courtesy of Groundswell Gloucester.

2 thoughts on “Getting up for Gloucester”