The last chapter of my book, Mountain Tails, is called ‘Missing Tails’  and as 2010 is the United Nations International Year of Biodiversity, an extract from that chapter seems appropriate here.

The illustration for that chapter was the Greater Bilby, listed as  ‘endangered’ in Queensland and ‘vulnerable’ nationally — the Lesser Bilby is already extinct. 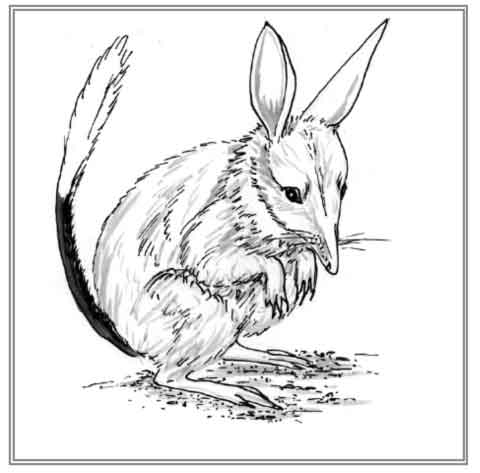 I am fortunate to be able to live amongst so many wild creatures, who belong here more than I do or ever could. Yet there are lots of tails I’d love to see but never will, because they’re extinct, or so few are left that they’re on the critically endangered list, or the steps on the way to that, the vulnerable or threatened species list.

The more I learn about the amazing animals around me, the more I grieve that so many equally unique and interesting Australian creatures are now gone. Their combined richness is what biodiversity means, and even though we may not understand how, all creatures, including us, have or had a place in an ecosystem; we are all linked. Like any chain, break or even weaken a link, and things eventually fall apart. Unfortunately those links are often invisible to us short-sighted slaves of Progress — until the effects of the breakdown, mostly irreversible, cause us trouble.

Australia holds the shameful record of having wiped out the most mammal species of any country in the world: 27 unique types of furry warm-blooded creatures, like us but oh so different, will never exist on this earth again, thanks to our clumsy Progress. And we’ve done it in only a little over 200 years. We’ve been rotten caretakers, compared to the original ones, who managed it so well for thousands of years.

We can add 23 bird species and four frog species to the tally of Australian creatures that are now gone forever. We can’t do a thing about this but we can help in trying to prevent it happening to the 22 animal species that are critically endangered right now, and the 345 species that are threatened!

My wildlife refuge is my own way of doing this, plus having my property conserved in perpetuity under the Native Vegetation Act, but there are various avenues and degrees of involvement for concerned people, landowners or not, including volunteering, observing and recording, donating and lobbying.

Even in towns, we can at least try to do no more harm, for example by keeping pets in at night when many native animals come out to feed. Think of small creatures like the Lesser Bilby, lost forever, every time it seems a chore to do so. It probably didn’t ever live in your area, but others of the 54 extinct animals did. If you want a more personal iconic image, find out from your local National Parks office what is under threat in your region, what birds, mammals and reptiles might not be around much longer.

When I see the wild animals around me living such efficient and rich lives in the natural world we inhabit here, requiring of me only that I should leave them alone, I wonder that we got our priorities so wrong, on such a large scale, in this country.

Take a look at the website for the Convention on Biological Diversity. UN Secretary General Ban-Ki Moon talks about the sad state of our world, where human activity is wiping out species at about 1,000 times the natural rate.

Eight years ago, world governments pledged to halt to growing biodiversity loss by 2010, but they have not succeeded. In fact, the reverse is true. We have put our eco-systems out of balance with our expansion of population, cities and farmlands, our clearing or pollution of habitats, our total lack of sustainability considerations; the cost of continuing on this path is extinction of more species – and inherently therefore, the ultimate threat to our own.

On the latest Union for Conservation of Nature (IUCN) Red List of Threatened Species, Australia is seventh in the ‘top’ ten countries, and our numbers have worsened, as have the others.

In Australia, to support this International Year of Biodiversity, many environment groups (and The Australian Greens) are backing the Boobook Declaration (see it here).

The Boobook Declaration calls on the Australian Government to:

1. Acknowledge the critical importance of safeguarding biodiversity as part of Australia’s climate change response and commit to correspondingly urgent action to address the systemic drivers of biodiversity loss.

2. Increase investment in biodiversity and ecosystem protection, restoration and management to at least $9 billion over the three years to 2012 and establish an independent consultative process into future funding and stewardship of Australia’s terrestrial, aquatic and marine biodiversity.

4. Develop education and training programs for all sectors of the community.