Noticing that the first reddish tones of Autumn were appearing in some leaves of the Glory Vine that clothes the western ends of my verandah and mud walled cabin, I decided I’d better celebrate its green stage before I lost it for the year.

I am always astonished at how vigorous it is, how far it grows over summer from being totally cut back to woody stumps each winter.

Despite — or perhaps because of? — the wallabies nibbling the lower shoots and trying to get at more from my verandah, it was even more far-reaching.  As you see, I netted the bottom vines, barred my verandah access, and off it took! 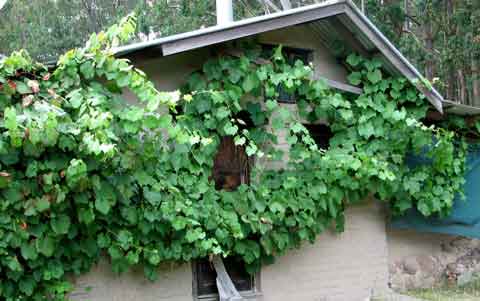 As it reached higher I strung more wires for it, which were greedily seized, enveloped and looped about, gradually  greening and cooling the afternoon light through the windows.

Don’t worry about it blocking that door — there’s a bookshelf on the other side anyway!

The door is there because the cabin was only ever half-built, one wing of the original — and still intended — ‘V’ design. One day.

Once on the verandah the Glory Vine takes second place to the Wisteria, threading its broad fans through the finer fronds, adding texture as well as pattern and of course, more shade, to this western corner.

So before I start waxing lyrical about the riotous colours of Autumn — glory to the green Glory Vine!