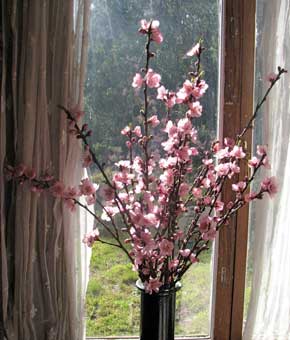 I have now managed to prune four of my fruit trees so as to be able to net them later. It has to be gradual, as my thumb joints don’t like too much secateur work at a time.

One of these trees, the nectarine, had so many closed buds that I felt like a murderess – well, an abortionist really, or at least a very wasteful woman, as I thought of all those nectarine fruits that would never be.

The other prunings, the peaches and the plum, were not so advanced; I could bear to pile them up to burn. But not these tiny tight buds of deep rose colour.

So I brought them indoors and filled several large vases with their tall twiggy promises. 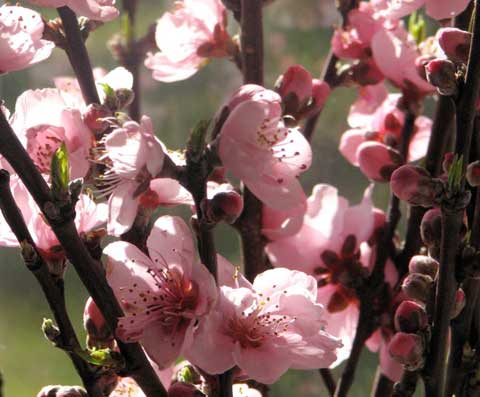 Now, one week later, Spring has come to my cabin interior as those buds have burst into fragile pink blooms with spangles of stamens and even an occasional bright green leaf unfolding.

As there are still closed buds, the range of shades from translucent pink to rich burgundy offer an extra visual treat.

Given that these blossoms are usually outdoors, on the tree, I have never smelt them before. In a closed environment, it isn’t pleasant, being reminiscent of ammonia, and even overpowers that of the vase of jonquils in my bedroom. Perhaps it’s the nectarines’ revenge for being picked prematurely.

But most things – and people – do not excel in every sense: the beauty of these blossoms is enough.

I just remove them from my bedroom at night.