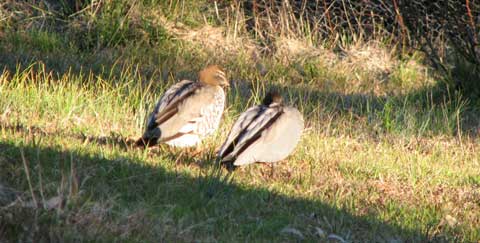 A pair of wood ducks have installed themselves in my yard, which they like because it has a small dam close by. I come across the couple in odd places and at odd times.

The other morning they were dozing in the warming rays of early sunlight; the female remained with her head under her wing for some time but the male assumed a vigilant pose at the first camera click.

As he patrolled around her, she awoke and began to groom herself up for the day, fluffing her elegant feathers and ferretting amongst them.

They both have beautifully marked plumage, with secret flashes of colour only fully revealed when they fly. His dark ‘mane’ is not always as prominent as here. 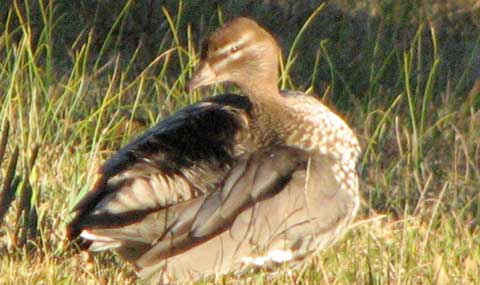 Finally, satisfied with her apearance, she gives him a coy look — ‘Ready, dear.’ — they begin the day’s grazing. Incidentally, they also fertilise the yard, as I am constantly treading in it!