Our governments appear to be blind, mad or bad when it comes to coal. This is just one instance.

Firstly there is the madness of having approved, in 2007, a mega coal mine that in Stage One will produce 127 million tonnes of coal over 15 yrs for the world to burn to make more CO2 — just what we need; now they are contemplating approving Stage Two, to produce 17 million tonnes of new coal per year for 24 years — even better if we don’t want the global warming to slow down.

This Moolarben mega-mine, owned by  Felix Resources, will comprise three opencut mines and a longwall underground mine.

The three opencut mines will trash the picturesque Moolarben valley, rich in bird life and biodiversity, will displace many farming families in this area and come within 2 kilometres of the village of Ulan and local primary school. I’m sure they will welcome the health benefits from all the heavy metal laden fine dust particulates and the 24-hour noise, lights and stress. 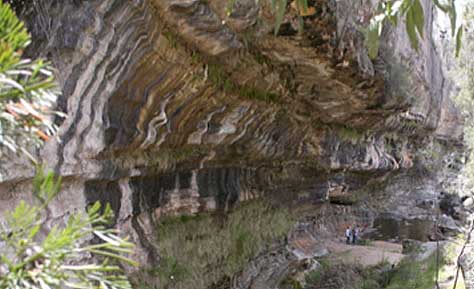 ‘The Drip’  in Goulburn River National Park under threat from mining; get the scale of its grandeur from the two figures at its base.

The proposed longwall mine, within 120 metres of the Goulburn River, will threaten the fragile sandstone cliffs and gorges along the Goulburn River, important Aboriginal cultural sites, including cave paintings, and the groundwater system, lifeblood of this land.

Subsidence and horizontal movements from the effects of longwall mining have the potential to crack cliffs more than a kilometre away and intercept and pollute groundwater that feeds the river.

Stage One hasn’t started yet but they are up to their seventh modification application; it seems they agree to anything to get the original approval and then get it altered to suit them — not the environment.

I wonder why they feel confident of getting approval for such blatant manipulation of the conditions of assent by which they must abide — theoretically at least, since mines breach their conditions continually.

Take a look at the Save the Drip website which will now be a permanent link from my site. I had thought it already was, as it deserved to be, so my apologies to the people desperately trying to save The Drip — and all the other environmental treasures over there. 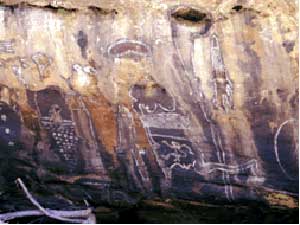 Apart from the important Aboriginal cave paintings, there is also a confirmed Brett Whiteley rock mural within the mining lease area.