Q. What’s black and yellow, clicks quietly and annoys politicians?
A. A Knitting Nanna Against Gas — a KNAG.

KNAGs also own to being Knitting Nannas Against Greed.

Never heard of the KNAGs? Well you’re about to be introduced, because I’ve just returned from the inaugural Internannanational Conference on the NSW north coast.
My friend Christa from Kempsey also went, and took the following blog photos for me (except where noted otherwise). That’s Christa second from right, front line, in the group photo above, taken by Louise Somerville.

Imagine 80-odd women of a certain age and beyond, dressed to disarm and amuse, in a riot of Op-shop styles and shades of yellow, but nearly all wearing the trademark knitted KNAG beret, beanie or snood in yellow banded in black, or crocheted accessories like earrings and necklaces and hair or hat decorations.

To quote from their website, ‘KNAG draws on a broad history of knitting used as a tool for non-violent political activism.’

…’We sit, knit, plot, have a yarn and a cuppa, and bear witness to the war against those who try to rape our land and divide our communities.’ 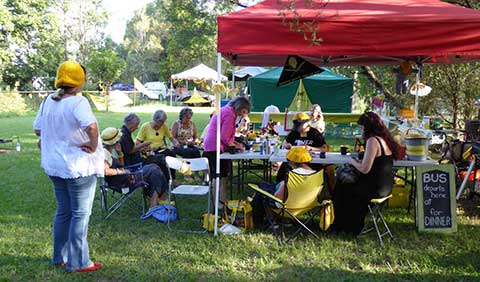 I was camping at Camp Liberty at Eltham courtesy of tireless and innovative anti-CSG warrior couple Judi and Gwilym Summers. Here the casual atmosphere, conversations, camp showers and loos, good food and river swimming brought such a great sense of Nanna camaraderie that I was glad I hadn’t chosen to be billeted.

I’d intended to take my own slide-on camper but it was too wet at home to get it on, so the Summers generously offered me their brillant mini-pod teardrop retro caravan that Gwilym had made: VIP accommodation indeed! 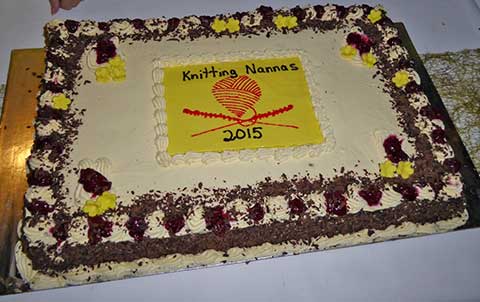 We were bussed everywhere, carefree of getting lost or staying teetotal. The weekend started with dinner at the fabulous and friendly Eltham Pub, where the conference cake bearing the KNAG ‘coat of arms’ was cut. 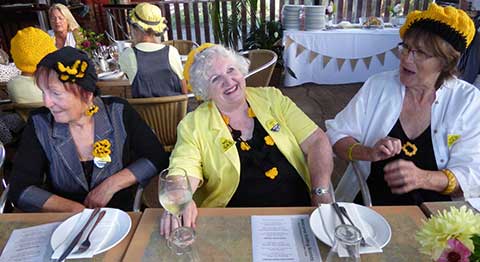 Then a full day Saturday at the Lismore Workers’ Club, where the programme was a well organised mix of facts and farce and KNAG history, as told by founding member Clare Twomey, in between three great speakers, whose presence I consider to be a mark of the respect in which the KNAGs are held. 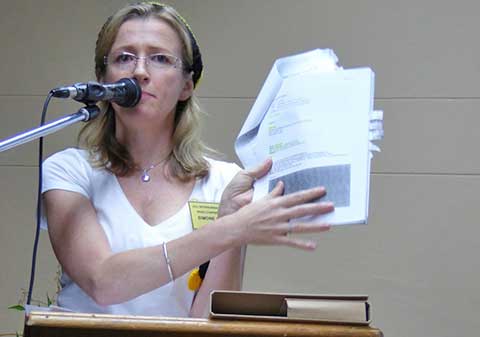 The brave and gentle Simone Marsh, Queensland environmental scientist and CSG project whistleblower, horrified us all with the truth she uncovered of the global net of influence and the pressure exerted to pervert our ‘systems’ to get the result which government and industry and investors agree is best for them.

The impacts on the environment are so irrelevant to these decision makers that they were not even investigated at all in some cases and figures grossly exaggerated or reduced to suit their end — approval, and fast.

Always enlightening, Sue Higginson of the Environmental Defender’s Office spoke about ’Tiptoeing along the fine edge of the law’ in protests. The EDO has advised, represented or defended many people and community groups (including me) who act on behalf of the environment. To manage so much with all the blatant cuts to their budget they do need help. I shudder to think where we would be as a society without them. I donate; will you think about it? Visit their website. 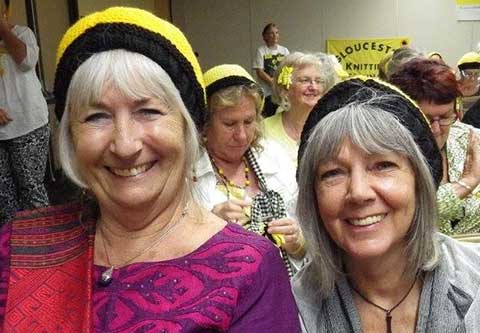 I was glad to finally meet Dr Mariann Lloyd-Smith of the National Toxins Network, whom I greatly admire. She put forward enough facts about the chemicals used in the CSG extraction process, and their health impacts, to make us all even angrier than we already were about what this industry dares to do — and dismiss, deny or lie about it — and our government to allow.

We are now the proud owners of beanies knitted by Jenny Leunig, a KNAG almost since they started in 2012 in Lismore. Jenny says you can pick hers because of the cat hairs inadvertently woven into the band, as she knits with a cat or two on her lap! (Jenny took this photo.) 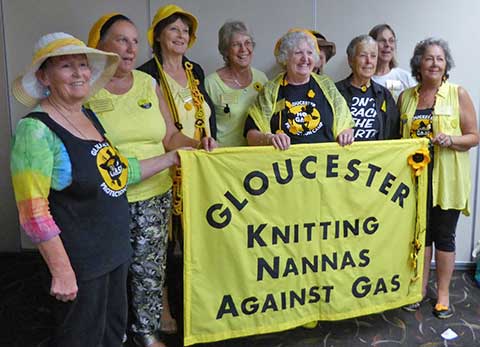 Nannas from ‘loops’ in places near and far had come, although most were from the Northern Rivers, veterans of the battle against Metgasgo, and of the Glenugie and Doubtful Creek and Bentley blockades. I was proud to see so many of the wonderful Gloucester and Downstream Knitting Nannas there. 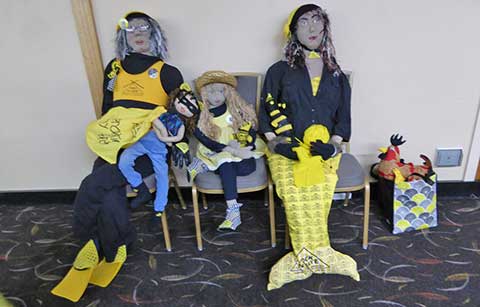 Chatting as I signed books at morning tea or lunch, I met many clever and creative women, like Lynda from Kyogle, who presented me with a beautifully knitted rosebud, or Erica from north of the border, whose knitted anti-CSG family watched the Saturday sessions with interest. (They are also active in protecting the Reef, hence the tail and flippers.) 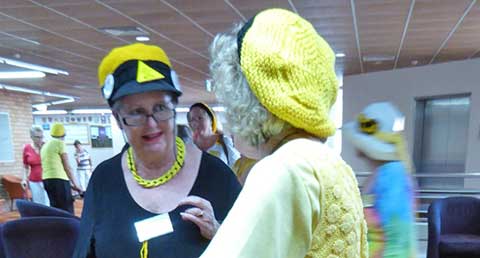 I met again the Nannas who brought me to Lismore and other north coast towns back in 2012 for talks about the book and the issues therein: Louise Somerville and perpetual paparazza Jenny Leunig (caught here (left) in a rare moment out from behind her camera, chatting to Frances De Glas, aka The Extremist. 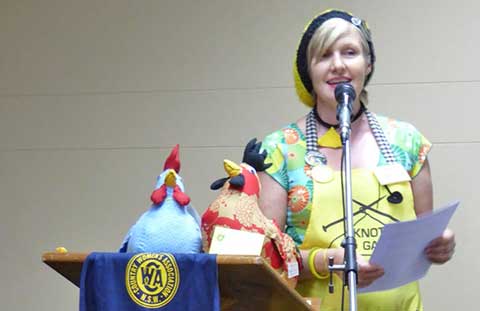 Louise is also from Chooks Against Gas and has forged strong links with local CWA groups. She epitomises the Nanna credo that you don’t have to be a Nanna in real life, or even a knitter, to join the KNAGs.

I heard how the Nannas gave ongoing NannaCare to the arrestable protestors (’Simmos’) at the Bentley Blockade, with the hilarious duo of Nonna Angela and Nanna George hamming it up as they displayed what items their multi-pocketed aprons carried for that task. (They didn’t stand still long enough for a truly ‘still’ shot!) 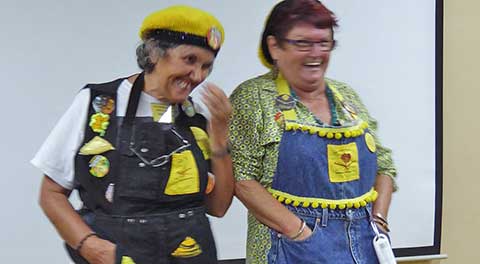 Nannas do tend to be cheeky; I think the ‘disguise’ gives them the freedom to play up, and this harmless, humorous approach, and their age, gains them the tolerance of the public – usually. It also masks their determination.

By the way, ‘a determination of Knitting Nannas’ seems to be the favourite amongst the offerings in response to my call out for a collective noun for the gathering.

Which Nanna Rosie Lee pointed out is also ‘a deter-mine-nation’.

What we learnt from Simone, Sue and Mariann fired and inspired everyone to fight harder, especially in the lead-up to the NSW election. After all, the conference slogan was ‘I want a government that’s not for sale’. 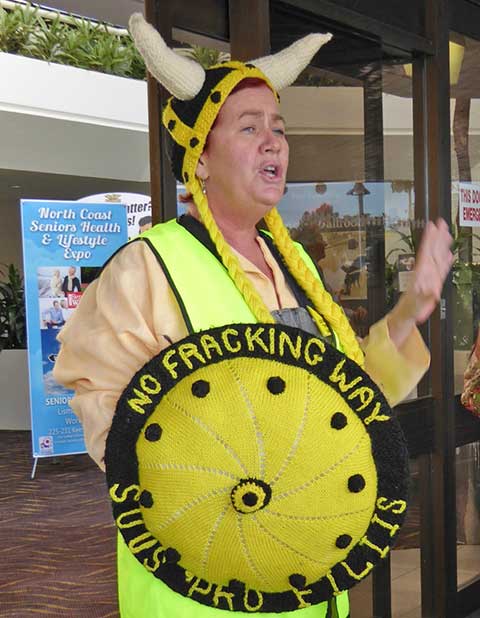 Queensland KNAGS from the Scenic Rim and Cairns, including Nanna Purl Stocking Stitch – aka Brunnhilde, the fearsome Wagnerian heroine with knitted horned helmet and shield, shared their successful election tactics on the Sunday morning. 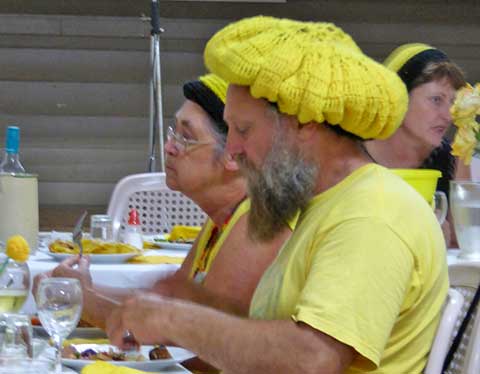 On Saturday night we were treated to an excellent Nanna-catered dinner and ‘shenannagans’ at the Eltham Hall, with decorations like vases of yellow roses – knitted of course; some Nannas brought their partners, such as Nanna Felicity, whose Chris sported an extra-large snood to hold his dreadlocks.

The KNAGs manifesto attests that they are not affiliated with any political party; ‘we annoy all politicians equally’!

As I said in my own talk, “When women become warriors”,
– ‘The Nannas are non-confrontational, calmly knitting, causing no trouble but stoically affirming the rights of future generations, swallowing no political placatory bullshit and asking awkward and informed questions. Absolutely infuriating!!’

KNAG knit-ins pop up outside politicians’ or corporate offices or local shops: …’they draw attention in non-threatening, warm and womanly ways, invite and answer queries. They do all this war work in between their other duties, their jobs and families. Stalwart and subtle women warriors.’

‘One should never underestimate the Knitting Nannas, who appear mild, but the truth is that knowledge – like knitting needles – can be a lethal weapon. Politicians and candidates would do well to pay attention to the words of women bearing wool, because they also bear wisdom.

‘I hope they listen and keep in mind the future wellbeing of us all, not just of their party politics – and of society, not just the economy.

‘After all, Nannas always know best.’

EndFragment
A warning: Gloucester KNAGs are planning a pre-election knit-in for March 23, midday in Martin Place. Nannas are coming from all over the state to sit and knit ‘for the kiddies’ future’.

(For their latest shenanigans, check out The Knitting Nannas Against Gas Facebook page.)