Recently I visited Lithgow, partly to see how the area just south of it compared to the Hunter Valley, since both are now threatened with a third power station, also likely to be coal-fired. 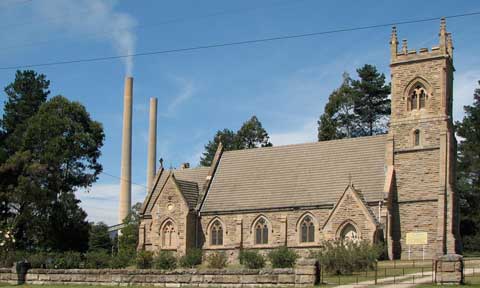 At Wallerawang power station the village of the same name is extremely close by, as the church shows. I wonder if the residents are aware of the toxic contents of those plumes of smoke? In the Hunter, Ravensworth, once probably the closest village to those power stations, is now obliterated, the abandoned school the only testament that once it thrived.

South of Wallerawang, between that and the Mt Piper Power station, with a 200MW extra power station planned just 2 km away, is  the village of Blackmans Flat. It reminded me of Camberwell in the Hunter — being choked out of existence by coal.

Blackmans Flat only has 13 houses, but they are surrounded by open cut and underground mines plus a power station fly-ash dump, all blaming each other for the dust, noise and blasting cracks. 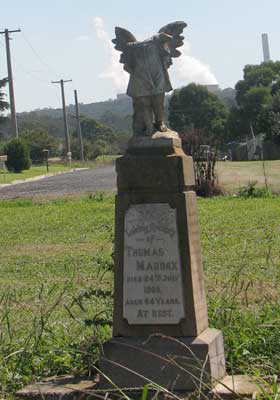 Why doesn’t the government take the cumulative effects of these approvals into account? It must seem to Blackmans Flat residents that it’s because people don’t count.

In the village cemetery I see that people have lived here for over a hundred years. With the health hazards that surround them now, and worse looming, I fear for the village and its residents. But how can they leave, for who would buy their houses?

As the valley fills with dust and noise, the cliffs split and fall away and the filtering hanging swamps drain dry through the cracks from undermining, we must remind ourselves that all these operations are under ‘strict environmental guidelines’.

I wonder if Lithgow Council, who support the third power station, know what they are allowing to happen to their scenic region and its inhabitants. While underground mines currently dominate here, unlike the Hunter’s open-cut moonscape, the pollution and the destructive impacts are increasing and so are the mines.

As my bumper sticker says, ‘Coal costs the earth.’