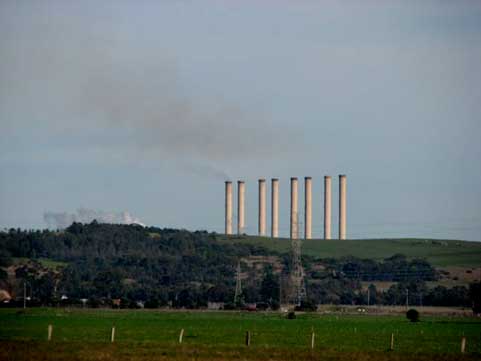 Once the fog had lifted from the Latrobe Valley, the old Hazelwood Power Station near Morwell showed the true colour of its emissions — brown. Of course the real toxic output of such an outmoded technology — CO2 — is colourless, and all the more insidious for being invisible and thus unacted upon. Hazelwood produces 16 million tonnes of greenhouse gases each year — 15 per cent of Victoria’s total emissions.

It is also Australia’s largest single source of dioxin pollution.

Due to close in 2005,  its private owners asked, and were given permission, to keep pumping them out until 2031. 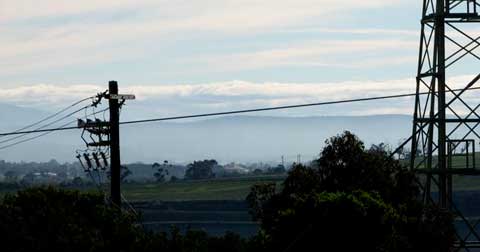 The brown sky trail edged around the valley for kilometres, still clearly visible beyond Traralgon where it seemed to bank up against the hills in what was, for a Hunter person, a more familiar milky pollution mist. It was not fog. 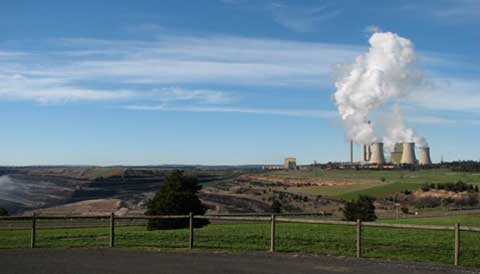 In the newer power stations like Loy Yang A and B, the only visible output is the water vapour from the cooling towers. Looks harmless, doesn’t it? Almost clean! But while the CO2 emitted is less than at Hazelwood, it is still more than our planet can stand.

Brown coal contains about 65 per cent water, and is 33 per cent dirtier than black coal as a CO2 emitter.

There is much research afoot into various ways of drying it and reducing emissions — but mostly only to as much as black coal. Not good enough! 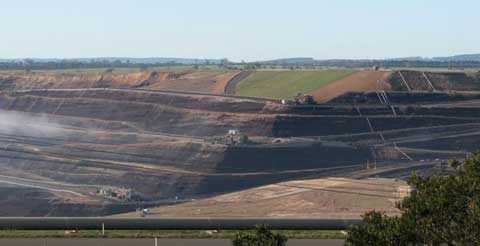 A few scraps of fog hung in the mine void, but no dust. For local impact, brown coal mining is amazingly clean and tidy compared to our Hunter open cut black coal mines. Loy Yang uses big excavators and conveyor belts, all run on its own electricity — very little diesel machinery.

I was sorry to hear that Yallourn mine had not replaced its excavators, but went to diesel power. I thought of the infrasound impacts of that, as well as the fossil fuel consumption.

The brown coal is close to the surface so the amount of overburden removed is negligible – lower than the landscape level, no 200m high mountains of exposed dirt, as we have.

The Latrobe is proud of its brown coal and its power: they have lookouts and picnic areas, and detailed tours (by PowerWorks). I went down into the mine and right inside the station.

The Hunter has none of this; as I returned to its murk yesterday I was reminded why. They have nothing to be proud of.
Just look at the difference, at the air we are supposed to breathe without complaint.

Shame on you, every minister who has approved more mines and expansions.

Shame on you, Premier Keneally, for allowing these coal companies to do this to the people of the Hunter. Your easy revenue is not worth it; get creative, find another source.

Or talk to Dave Kerin in the Latrobe, as I did, where I was inspired by Eureka’s Future, an initiative of concerned Victorian unions who want to set up a co-operative solar hot water manufacturing enterprise to provide transition employment for Latrobe workers. And yet they aren’t getting the government funding they need to start up.

If they did, the Hazelwood workers could move across so they could close that dinosaur down.

A smart and visionary government would back Dave’s Eureka immediately. Shame on you, Premier Brumby, if you don’t. Maybe the fact that Victoria has privatised its power industry means that what’s best for the people and the planet comes last, after the profit imperative.

We urgently need such transition industries in the Hunter.