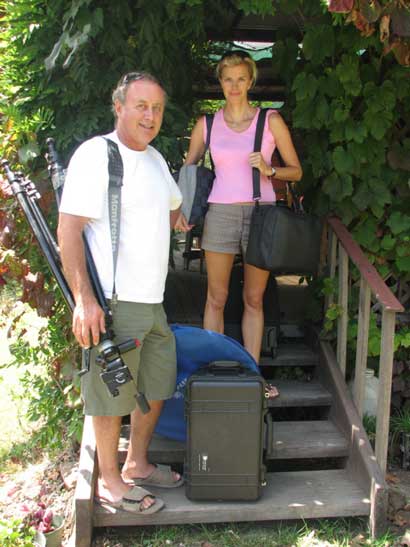 This week I ferried some unusual visitors in over the rough and muddy roads to my mountain. Not Mohammed, but equally unlikely, I’d have thought.

They had driven for four hours—and would return the same way—simply to take a photograph of me. Freelance writer Rosamund Burton has written a story on me for Notebook magazine and Notebook insisted on sending a hair and makeup artist and a photographer to my house for it. They clearly like to be authentic—that is, on location and up-to-date, and professional—no happy snaps taken by me.

So Jay Jay Rauwenhoff, a freelancer who loves the variety of places to which her skill takes her, opened up her two shoulder bags and one suitcase full of pots and potions and styling tools, set up her hair and beauty salon on my verandah and proceeded to ‘make me up’ and style my hair.

I wanted to laugh at the absurdity of it all, given that I have never had my face made up in my life and usually get by with tinted moisturiser and a kohl pencil.

Jay Jay assured me it would be a natural look, and on inspecting it much later, I had to agree she’d done a very subtle job.

Meanwhile Notebook photographer Scott Hawkins had been sussing out suitable spots. He also advised on what to wear. I’d been emailed a guide to colours and styles and had at least five choices in pinks and lilacs and blues laid out on my bed. This had taken me some time, since I tend to wear black and grey, which would not suit the magazine’s lighter tone.

But Scott said that what I was wearing—a hastily thrown-on hot pink shirt and blue denim trousers, both op shop of course—was fine!

Scott took photos in several poses and places while Jay Jay held a large white screen to reflect and enhance the light.

Then they packed up all the gear back and I drove them back to their car waiting at a proper road, with poor Jay Jay bouncing on the Suzi’s fold-up rear seat each time we hit a rocky patch or a pot hole. She was unfazed, and Scott said he’d been to Tasmania and back in one day just to take a portrait for an article, so this was nothing.

I know publicity is important for my book, and I guess I’ll know if this odd incursion was worth it when the article appears, probably in few months’ time, but right now it still seems crazy!

8 thoughts on “Mountain salon and studio”