I have a family of skinks who frequently dive under a flap of the dampcourse of my cabin footings, thence probably into a chink in those footings; a small pointy nose is sometimes to be seen poking out of the underfloor vent grille.
But most of the time they pose like statues and await slow-witted insects to pass by.

I think they are Southern Water Skinks of the Warm Temperate Form (Eulamprus tympanum WTF, more recently renamed Eulamprus heatwolei). They are fat and fearless, about 250mm long, and seem to operate in distinct mini-territories. 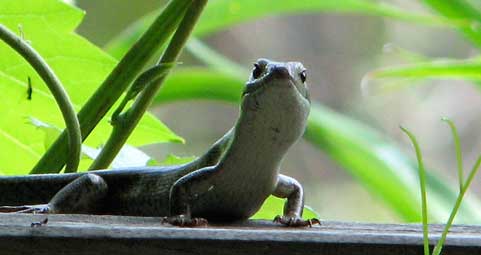 This one stays on the verandah front rails and steps and comes much closer to me and my doings. She is quite inquisitive, far less inclined to dart away — or to dart at all — and doesn’t mind a bit of shade as she often hunts amongst the greenery. 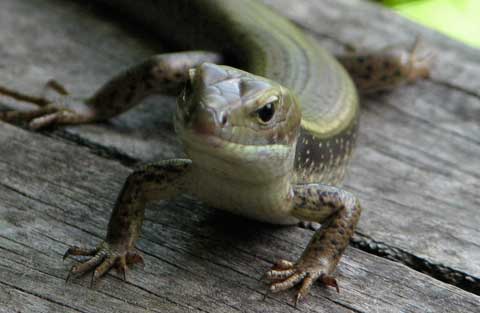 I have absolutely no idea why I think this one is a ‘she’, as I have no idea how to sex lizards.  When she feels like a bit of sun, she chooses the rocks on the front side of the steps, and shows her gorgeous metallic colours.

I can sit and admire her for ages; just look at the intricacy of her patterning, the ebony and lacework side trims and the woven bronze of her back. That pink nose, that elegantly lidded eye, that perfect earhole! 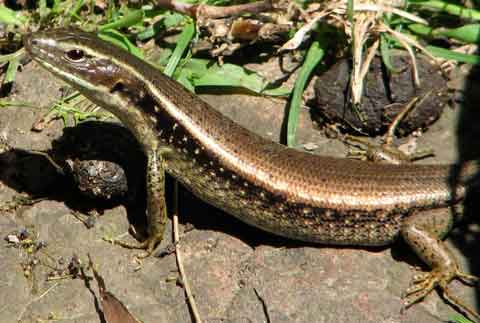 The other skink, who occupies the rear side of the steps and darts off when I pass, happened to be sunning himself there at the very same time as his greenie friend was out the front, so I was able to take photos of them both, in the same light, to compare.

Is it my imagination or does the one below have a more pinkish coppery tone to his back? And is the nose a less distinctly differentiated pink?

Either one is a jewelled beauty, as well as cute; who needs garden gnomes, bronze statuary or even trendy rusty iron sculptures when I can have these?

6 thoughts on “My special skinks”