I’m back home after a week in North-West NSW. I was there for the NorthWest Alliance of community groups across the Walgett, Moree, Narrabri, Coonamble, Gunnedah, Coonabarabran, Quirindi and Tamworth shires — all very concerned about the expansion of extractive industries there, especially coal and coal seam gas.

We were a trio at information forums in Tamworth, Gunnedah, Narrabri and Moree.

Mark Ogge from The Australia Institute spoke on the economic impacts, on agriculture especially, launching a new report, ‘Still beating about the bush’, I spoke on the social impacts, and Dr Steve Robinson from Gloucester and Doctors for the Environment, spoke on health impacts.

While issues were different in each place, interest was clearly high everywhere as good attendances (80-160) and keen questions showed. Eight times the current coal production is predicted for the Gunnedah Coal Field, as it is called overall, and CSG companies like Santos are well entrenched and keen to get going.

This is a major agricultural cropping region, proud of its water-retaining black soils, and most people want to keep it that way.

Tamworth may not be immediately threatened but I feel it could well become a Drive-in, Drive-out (DIDO) centre, where workers base their families, near amenities and away from the inevitable pollution if projects like those recently ticked off by Mr Burke go ahead — the Maules Creek mine and the Boggabri expansion. People also expressed concern about the role of coal in fuelling global warming. 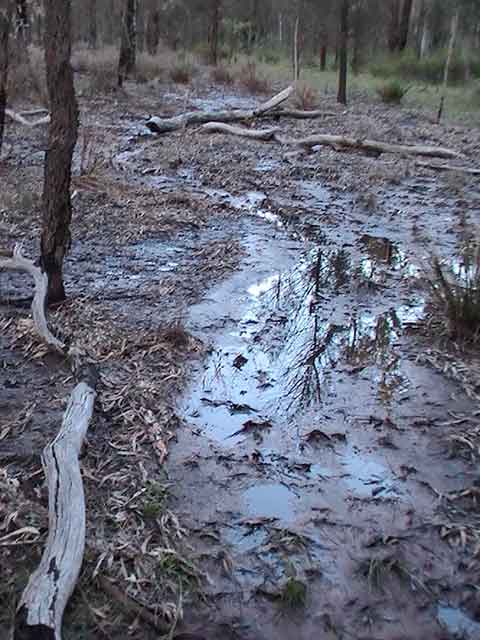 Gunnedah worries about both coal and CSG, being near the BHP Billiton Caroona EL, the Shenhua Watermark EL and the Santos leases, given what we have seen in the Pilliga Forest gas fields, where spills like the above give good reason to be worried. (See Stop Pilliga Coal Seam Gas.) It also has the Whitehaven coal stockpiles and processing plant nearby.

The main current coal expansion is around Boggabri, roughly halfway on the Newell Highway north from Gunnedah to Narrabri.  Boggabri is soon to get a single persons worker accommodation camp, as Narrabri already has. Gunnedah wants residential housing instead.

I fear for Boggabri’s future, for health and social reasons.

Narrabri Council has been and still is gung-ho in favour of these industries, with the Pilliga CSG fields between here and Coonabarabran, and the Whitehaven coal stockpiles not far away. Clearly not all the community agree.

To the north, Moree Council has stood up for their region to remain agricultural, not industrial. They also have the shining example of the Bellata/Gurley group who have stood united against allowing CSG exploration on their top cotton and wheat land, ‘locking their gates’ well in advance. 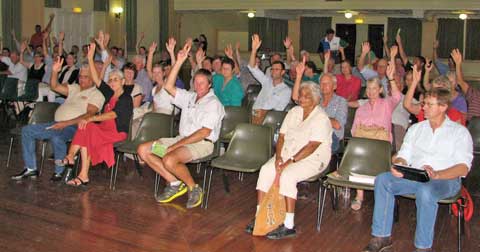 At the last three talks, I was greatly encouraged by the number of Gomaroi people who came, and who spoke up for the need for a united front to save our land and the water. The eloquent Alf Priestley at Moree moved many by his words about one human race.

At Moree I was also privileged to meet Auntie Shirley (front, above), the last person born at Terry Hie Hie, a mission, but also a very special place for the Gomaroi, who would be devastated to lose others like Leard Forest. As I showed her to a front row seat I felt like I was escorting royalty.

At chairperson Penny Blatchford’s enquiry, hands were raised in an overwhelming majority indication of wishes for a CSG-free community (Aunty Shirl certainly agrees, but is a little hard of hearing).

Further action meetings were planned in all four towns: the North-west will be an area to watch.

Next event in the region is the Leard Forest Listen Up on March 9-10, at the Frontline Action camp. See this good update from the camp and links about the event here.