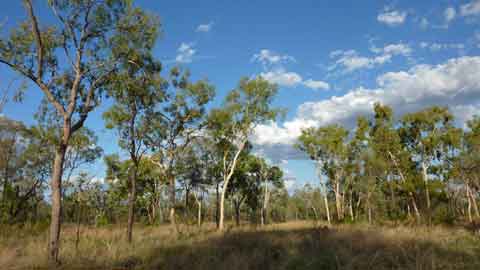 If the Galilee Basin in central-west Queensland sounds biblical, the scale of the threat facing it is certainly of epic proportions. The coal underneath it has always been there, but cattle and drovers, not coal mines and drillers, have dominated the land.

If you’re listening to the Queensland Government or the mining industry they’d use words like wealth and opportunity, revenue and development, but they would agree with the scale. Some of the world’s largest coal mines are proposed for the region, and coal gas industries scramble to tap into the underground energy potential.

If the powers-that-be have their way, the Galilee Basin could provide enough coal to almost double Australia’s current thermal coal exports, especially to China, to be burnt in coal-fired power plants and contribute billions more tonnes of CO2 to the atmosphere. That’s the global reason why we should leave it in the ground, there or anywhere, but the rustle of prospective dollars drowns out that argument.

Yet there’s also a critical precedent here, a unique regional reason why we ought not allow the Galilee Basin to be degraded from an outback Eden to an industrial wasteland.

On top of the coal seam that Clive Palmer’s Waratah Coal wants to dig up is Bimblebox Nature Refuge, 8000 peaceful hectares of biodiverse remnant woodland. If allowed to proceed, it would be one of the first protected areas, part of the Australian National Reserve System, to be lost to coal interests.

All of Bimblebox, as well as many surrounding properties, are under Waratah’s exploration permit. As current legislation stands, as long as the company receives the standard approvals from the state and federal governments – as we know they usually do – there is nothing to stop the innumerable living treasures, the plants and animals of Bimblebox, from becoming nothing more than dead overburden.

In 2000, when Queensland’s land clearing rates were amongst the highest in the world, several concerned people, aided by funding from the Australian National Reserve System program, bought the land and signed it up in 2003 as Bimblebox Nature Refuge Agreement with the Queensland government, to permanently protect the conservation values of the property.


Tragically, Nature Refuges and the protected areas that make up the National Reserve System are not automatically protected from mineral exploration and mining, which in Australia are granted right of way over almost all other land uses. As the owner of a Wildlife Refuge, under a Registered Property Agreement, about to enter into a Voluntary Conservation Agreement, also in perpetuity – unfortunately I have to tell you that the NSW government gives mining the same rights over all I value in nature.

Why do we bother? If Bimblebox was considered significant enough, having 95% of its original vegetation, to be officially reserved —– and partly funded — by the government then, how can it now be so insignificant that its total trashing is being contemplated by the government?

In its seven years, Bimblebox has become even more ecologically valuable. Its semi-arid woodlands and understorey of native shrubs and grasses has a rich diversity of birds, reptiles and other animals. Bimblebox is a genuine example of how production and biodiversity conservation can co-exist. A small herd of beef cattle assist in the control of exotic pasture grasses, and a number of longterm research projects, with permanent monitoring sites, are aimed at generating knowledge and management practices to improve outcomes for biodiversity across the region. Take a look for yourself (www.bimblebox.org ). But mining and biodiversity?!

Now Hancock Coal’s proposed rail line to take the Galilee coal 495km to the wetlands of Bowen’s totally inappropriate Abbot Point coal loader has received ‘state significance’ status by the QLD coordinator general, which means that the government can ‘compulsorily acquire’ land should landholders wish not to be host to this madness.

I dispute their interpretation of state significance; Bimblebox is that, and should receive precedence over private business interests. 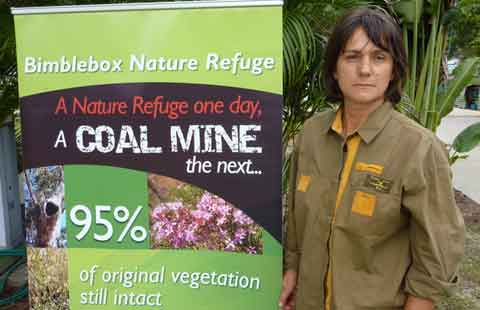 One of the next ‘official’ opportunities to express concern will be to comment on Waratah’s environmental impact statement, due for release in the next month. If you would like the chance to comment on this and provide feedback to the state and federal governments on this issue, please email Paola (pictured above) and she will let you know when the four-week period for comments commences. It will also be notified on the Bimblebox website which will now be a permanent link from my site.

6 thoughts on “Outback Eden under threat”