Last weekend I attended the 4th conference of the Knitting Nannas Against Gas (and Greed), held at the picturesque Glenrock Scout Camp near Newcastle. Hosted by the Hunter, Central Coast and Mid Coast Loop, it was a talk and food fest as well as a knit-in.

I was privileged to be one of the speakers, as I had been at the inaugural conference in Lismore.

As it was on Awakabal land, we were welcomed to country and treated to a smoking ceremony and unusually interactive story dances, where Nannas turned into quite coy brolgas.

My camera decided to go on strike during this so all photos are by Dom Jacobs — thanks, Dom! — unless otherwise noted. 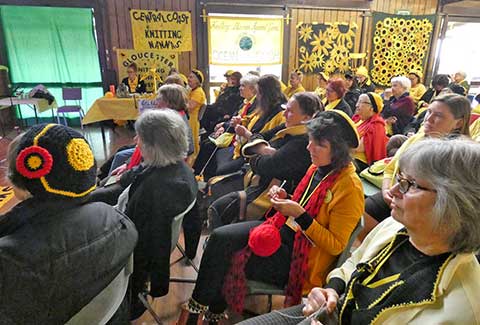 Nanna ’loops’ from all over the state came to talk and listen, network and knit, plot and plan more innovative ways to gain a better future ‘for the kiddies’.

While the KNAGs have been known for their creative yellow and black ‘uniforms’ and knitted items, since the Narrabri conference in 2017 they add red to show support for the Indigenous cause. Sunflowers remain a central theme since the successful Gloucester anti-CSG campaign. 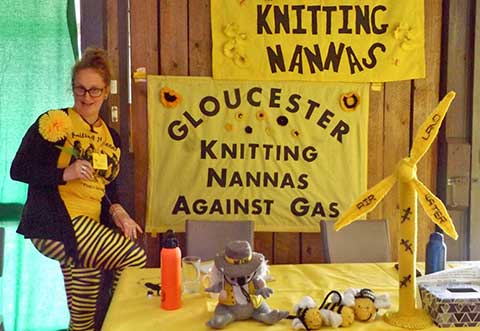 Some Nannas’ outfits, like Tina’s tights, do more than catch attention; they demand it. 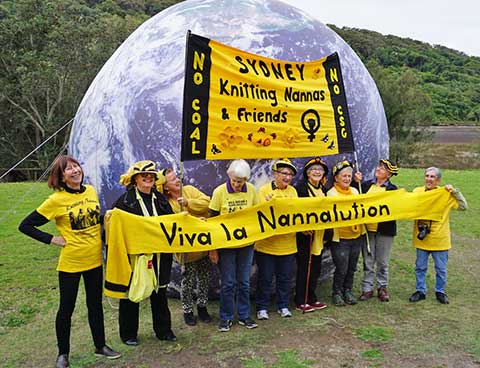 The Sydney Loop (above) used to support Gloucester by sitting and knitting outside AGL head office in North Sydney each week. Now they annoy Santos by doing the same in Martin Place. Honorary male Nannas like Bill, Colin and Peter join them.

The stalwart Santos watchers from the north-west came: Pat and Tania and ‘Nanna Wranglers’ Dan and ‘Pirate’, and Dan gave us an update on the situation in the Pilliga. 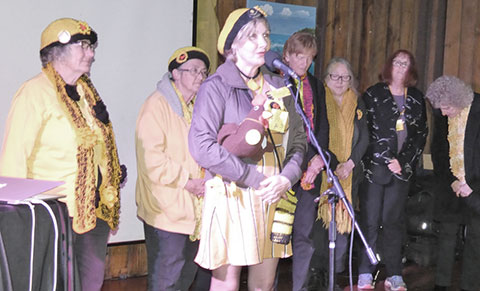 And quite a few of the Nannas from the Northern Rivers, where this elder disobedience all started, made the long train trip down. Louise of Chooks Against Gas, of course, came with chook attached. 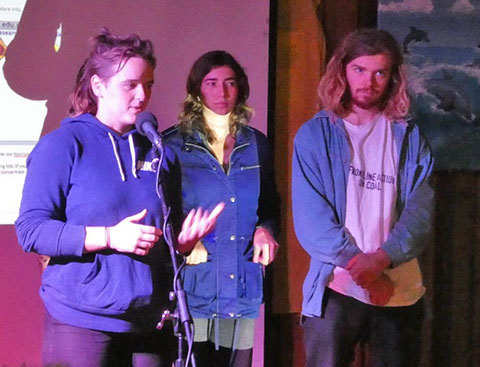 The young FLAC activists who’d been bodily attaching themselves to coal trains and such the previous week gave us an update — and some even doubled as wait staff the following night at the grand Nanna dinner. 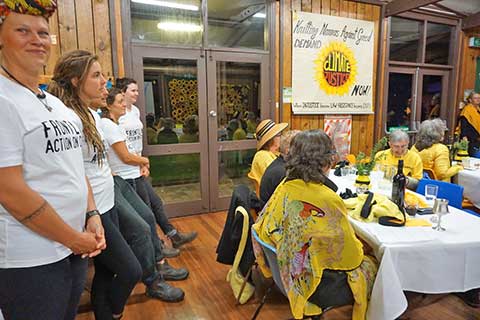 Whether Nannas with grandkids or those whose very future we are wrecking, climate change concerns us all and we each have our ways of trying to focus attention on the need for urgent action on this. 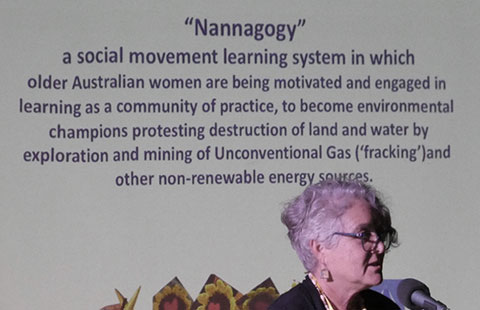 Larraine Larri told us of her ongoing study of the Nannas and some recent presentations. 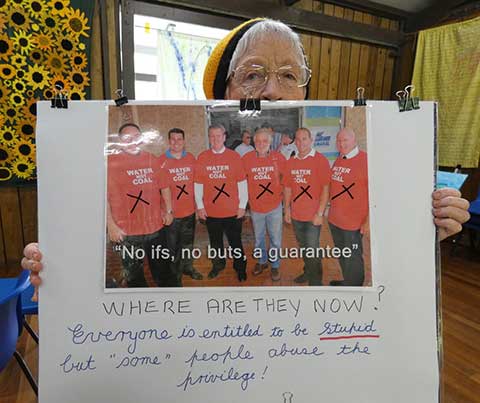 Next day Nanna Margaret from my Manning area did not mince her words!

Speakers covered many topics, all interesting, some scary, some depressing, but the Nannas do not shy away form the facts, and are notoriously well-informed — made easier by the excellent weekly Fossil Fools bulletin that Eve Sinton produces. 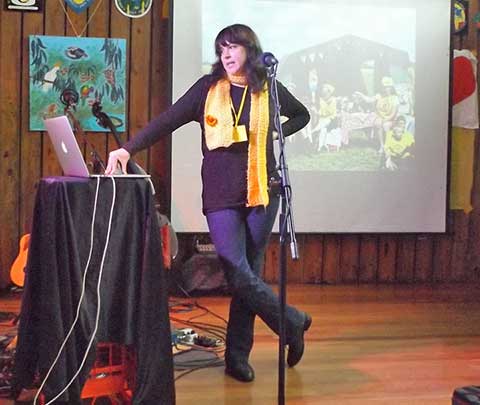 First George Woods spoke on the Hunter transition. Next Prashanti Mayfield from Melbourne gave us a taste of her PhD content, with a few laughs in her first hand picture of the Lancashire Nannas, and then horrified us all with a roundup of the latest state and federal law against protests and protestors such as Nannas. 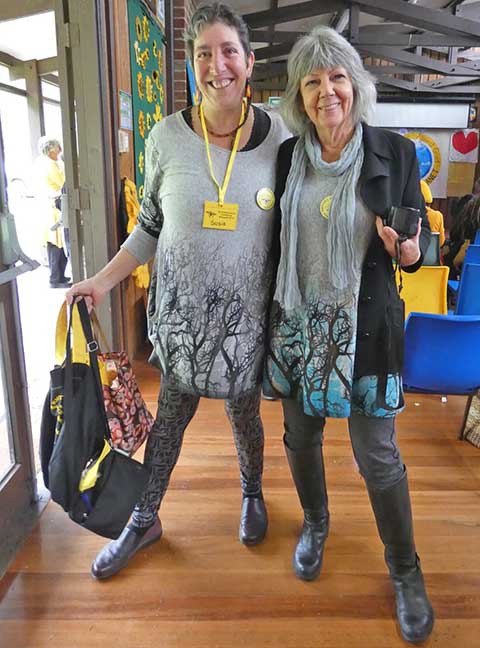 Susie spoke on the parlous state of our forestry practices and the RFAs that allow virtual clearfelling, and the threat of our native forests ‘going up in smoke’ — for biomass energy. A sense of dismay and distress prevailed. 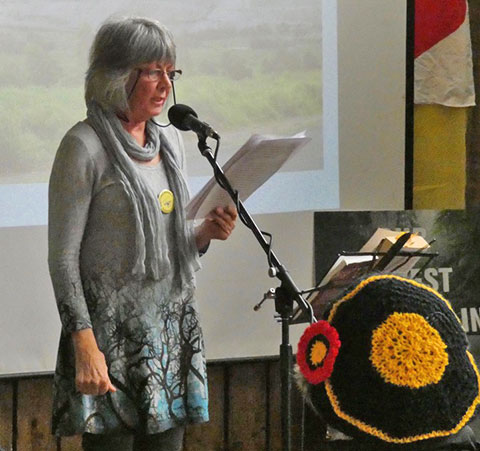 I spoke about the ongoing battles of my Queensland women warriors, Paola Cassoni of Bimblebox Nature refuge against Waratah Coal, and Merilyn Plant and her daughter Tanya Ward, against New Hope’s Acland Stage 3. Both fights have been going since 2007.

But Merilyn and Tanya and families live with the current mine’s dust and noise while trying to stop them making it worse, and after winning in the Land Court’s longest ever case (99 days), they must go through it all again… 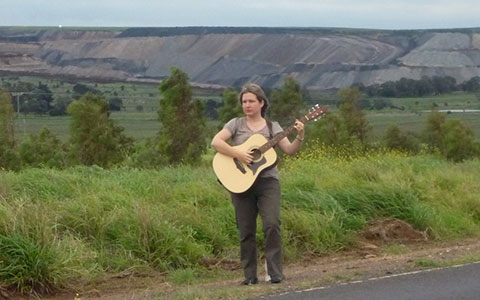 I played a song by Frida Forsberg about Anzac Day in Acland — the town erased in advance by coal — with accompanying photos, after which there was hardly a dry eye in the hall.

People were shocked, and kept asking me, ‘How can they do this to people!?’

Here’s a few extracts from my talk on that matter:

‘As Stuart Andrews said the last day of Tarwyn Park: “The mining companies are just doing what the rules say they’re allowed to do. It’s the politicians who don’t understand the impacts, on the environment and families and communities, and they don’t care.”

‘Well, they should be made to read my book; any with hearts would then have to care, about the social and personal mental, physical and emotional harm they are allowing; any with consciences would go sleepless at the possibly irreparable damage to land and water they are allowing, and any with brains would see the stupidity of short term private profit extractive industries — and their jobs — wiping out long-term rural industries and food bowls — and their jobs.
…
‘As Nannas you target the pollies who allow the harm, and the corporates who choose to inflict it, with your stoic en masse yellow and black presence, calmly knitting, deceptively frivolous and sometimes slightly dotty, causing no perceptible trouble as you bear witness to the rights of future generations, swallowing no placatory political spin and asking awkward questions. It’s hard to take offence at a sweetly smiling, infuriatingly well-informed Nanna. Just sittin’, just knittin’…’

We had a fun dinner evening with Paul Robert Burton playing and singing, which seemed to turn most Nannas into slinky dancers. And a conga line of Knitting Nannas is formidable!

The eldest, Nanna Margaret, set an example by staying on the dance floor until the music was no more. Now that’s the sort of perseverance that frightens politicians…

I had to leave next day while the Nannas headed off in their best yellow and black finery, for photo protest opportunities at the coal loader and the beach, in this the world’s largest coal port. As I saw the convoy off, it felt like farewelling troops leaving for war. 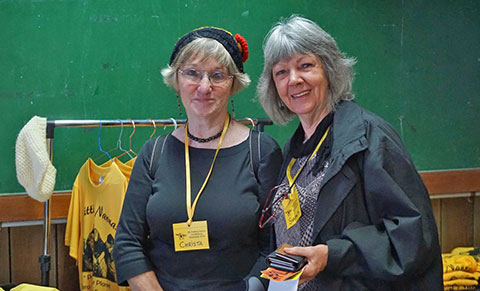 I end with a lovely pic by my friend Christa Schwoebel; the flowers may be ‘wet-the-beds’ but nevertheless they make a great KNAG symbol of hope for our planet. 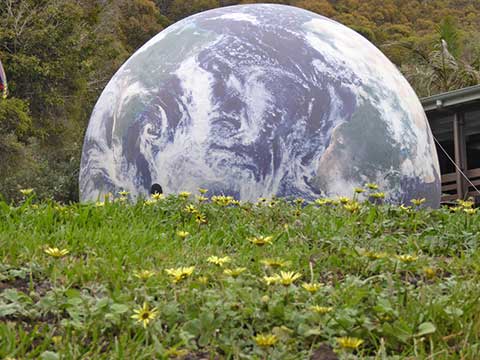 4 thoughts on “Plotting the Nannalution!”