The day my python had surrounded the shower shell on my verandah, I hadn’t been able to bring myself to risk a shower that evening.

It was a windy night, and next morning when I did go to have a shower, the rubber mat had been blown back, doubled on
to itself.

I usually just flick it back flat with my hand. Something made me use the broom this time.

Just as well, for there lay the sleepy python, in a perfect coil. 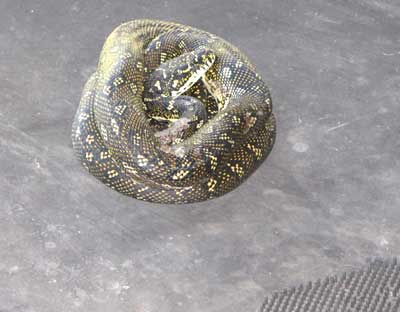 I gave the shower a miss yet again. A top and tail at the kitchen sink was a far better idea!

But I kept checking for when it might awake, to see where it would head next.

Eventually it uncoiled and poured itself over the mat and between the boards — or was it going under the mat? How would I ever be sure it wasn’t under that raised edge of the mat where it met the fibreglass base?

A friend arrived that evening, very envious of my acquiring a resident python.

‘You’ll have no trouble with bush rats or other snakes while it’s about’, he said, almost convincing me it was good idea.

I took too many showers anyway.

No sign of it next morning, but the day’s task was to find where that rat had been getting in, and to block it.

We walked around the cabin, checking the footings, and then where the roofing iron met the mud walls.

I went to point out one spot at the front highest corner, above my kitchen windows. I couldn’t actually see up there, but thought a block of infill mud may have been pushed out.

I was right, but showing me so was the python, its little head poking out from that corner. That meant the rest of it was in my ‘ceiling,’ a rough ply patchwork job with lots of gaps for a python to hang down from.

‘It’s only there for food; it’ll move on later.’

But when? And how could I live in the house, bend my head over my keyboard as I am now, when I must keep an eye always on the gaps in my ceiling panels, like the one right above me?!! 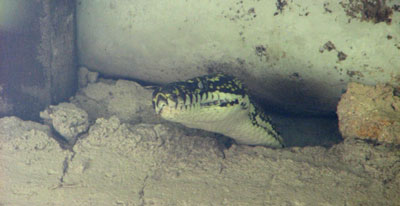 The plan was to wait for it to come out and then to patch the hole, but it didn’t emerge further for hours. It was watching the honeyeaters nest and could easily stretch itself to there. I thought of the swallows and how it would have eaten those babies had it been around then.

And then suddenly it made its move, to much carry-on from the birds.

My friend grabbed his snake crook, calling to me to grab something to put it in, but thinking he’d be too late to save the baby birds or eggs.

I ran up to the shed and seized an empty molasses bucket; they are square and have very tight-fitting lids. I wasn’t sure if the two metres of this snake would fit in there, but it would have to do.

He met me halfway back to the cabin, the snake suspended from his crook, not hanging straight and long and flicking about as the black snakes had, but in frozen S-curves like an electric griller coil. It was as if it was preparing to accommodate itself to the small bucket.

I made a quick decision: I preferred the birds. The python would have to go to the national park, away from my house and its other resident animals. Incidentally I could look forward to my showers once more.

And the honeyeater is still sitting on the nest.