It doesn’t seem so long ago that I was writing about a rare sighting for here –  a diamond python. That was a fair distance away, on the track.

Meanwhile a friend, having rescued a stunned python down on the tar road, had brought it here to recover.

He thought I might like one for my garden; despite the posed benefits of keeping the numbers down of other snakes and small mammals like bush rats, I declined and asked him to release it outside the yard down by the dam.  I thought no more about it.

I do have a bush rat of some sort that, every night, without fail, enters the house and dashes along the same exposed rafter, always between 8.45 and 8.50. I haven’t been able to find out how and where it goes in and out.

Then one night it did fail to show up. 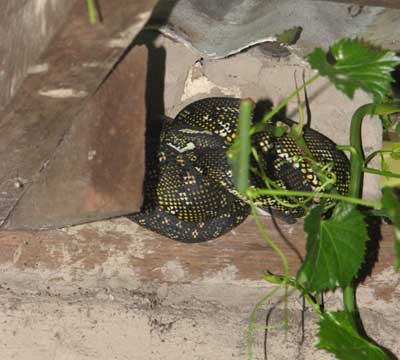 Next day this is what I saw, up on the top western corner of the mud wall on my verandah, partly hidden by the grapevine.

Plump loops and rolls of spots and diamonds, fishnet black over yellow and white.

It was a diamond python, curled up, fast asleep. Was this a post-prandial nap? Post-rat? 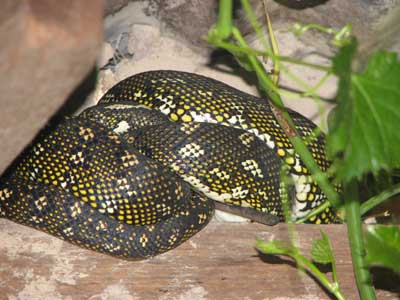 Even closer, I couldn’t see its head, so tightly was it curled to fit the short mud ledge. But the beadwork was brilliant! 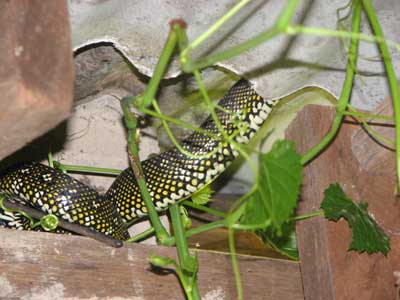 It stayed there for some hours. I kept checking, wanting to know when and where it would go next. Late that afternoon it began to ooze between the roof and verandah corrugated iron sheets, but where to I couldn’t see.

I rang my snake-loving friend who said it was probably entering the house wherever the rat had!

That night, still no rat on the rafter. It was hard to imagine how such a swift runner and cunning evader of traps as my regular rat could have been caught by the slow moving python, but if that was the case, I wasn’t sorry. Yet I wanted neither python nor rat in my cabin. This was my territory, I muttered to myself: it was not theirs to fight over and claim.

That night the verandah rafters were closely inspected by torchlight each time I went outside. No sign of my patterned visitor. I knew it wasn’t venomous but still I shuddered at the idea of inadvertently coming across it. 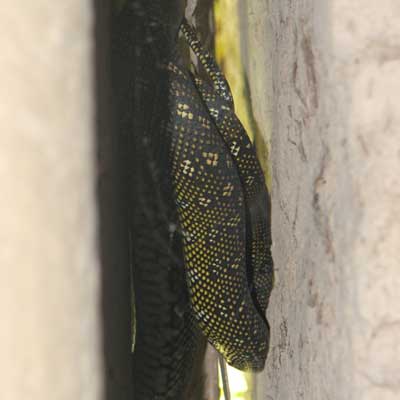 Next day, about mid-morning I happened to glance along the wall behind my open-fronted shower cubicle. I don’t know why, perhaps light was blocked where unconsciously I always saw a clear strip?

The blockage was patterned; the torch revealed part of a large python. 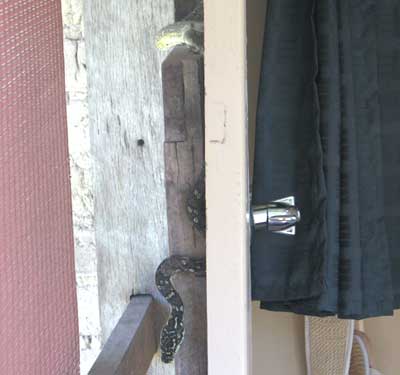 The rest of its astonishing length was undulating around the side of the shower frame, its head held poised, as if about to peep in.

The control of its body, the length extended horizontally, unsupported, was amazing, as it sussed out its next surface. 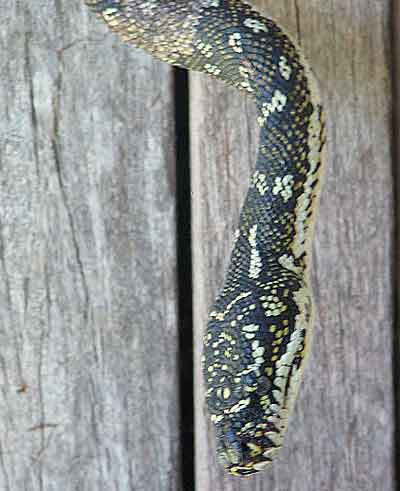 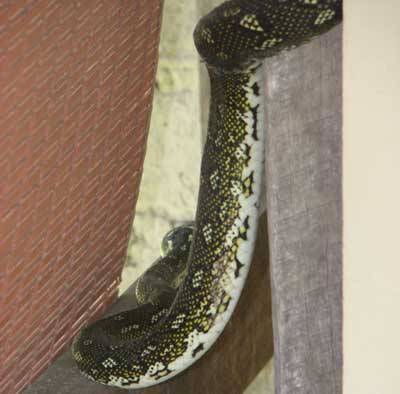 It moved off the verandah edge after about an hour of my anxious checking. But where to next?

And how will I ever enjoy a carefree shower again, especially in the dark??? It was so silent, so able to go anywhere, to be lying anywhere – for the unaware.

It’s not like I have a bathroom door to shut!