Coming home after what had clearly been a wet week here, I was pleased to see my wildlife mates, including the plentiful kookaburras. 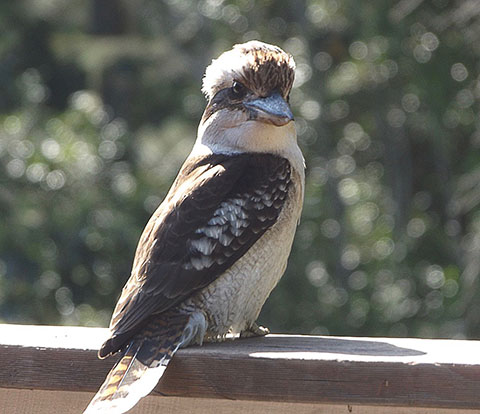 This one on the deck railing looked around at my intrusion as if he’d become used to having it to himself.

But what was he so keenly watching down below in the yard?

A turtle! I tiptoed down to see. It appeared to be scrabbling in a circle on the slight slope; was it injured? 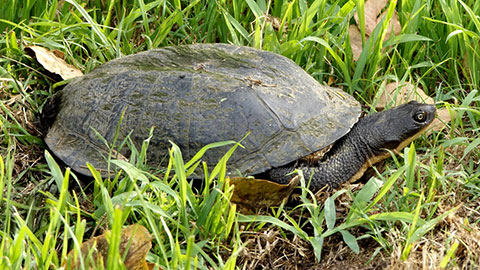 Up closer, I decided it had use of all four legs. Noting the dried green weed on its shell, I wondered if it was the same Eastern Long-necked Turtle that had visited me very early on in my residency here. This turtle (Chelodina longicollis) is one of the snake-necked types, for obvious reasons, and a species of side-necked turtle, as it bends its head sideways into its shell rather than pulling it directly back. 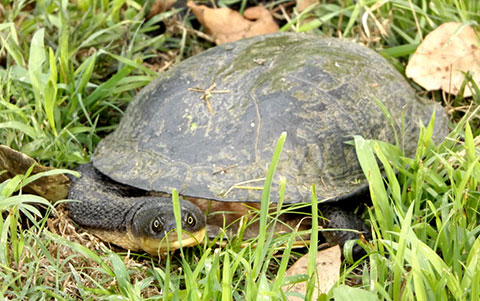 However, from the look it gave me, this one was not about to say ‘Hello, nice to see you again’ or any such. Bearing in mind that their other common name is ‘Stinker’, from the offensive-smelling fluid it emits from its musk glands if it feels threatened, I backed off. 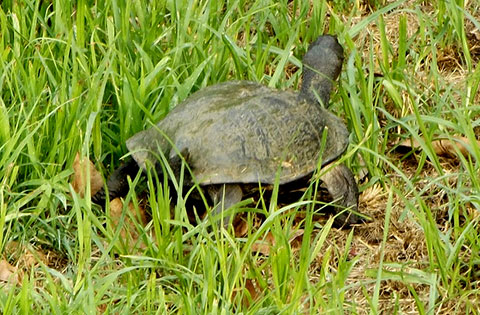 I stayed well away, watching from a distance, with my camera zoom at the ready.

When the turtle deemed I had been gone long enough and it was safe to move, it did, unerringly turning downhill towards the wetlands’ swamps and ponds. 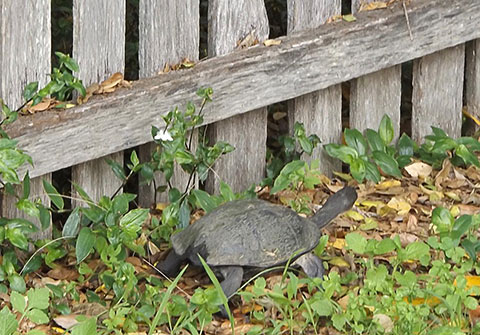 At a fair pace it skirted the old timber fence. There being plenty of broken bits, I knew it would find a way out. After all, it must have come in from the wetlands.

And was it revisiting? I hoped so, since an annual turtle treat would be most welcome!