Two echidnas have been aerating my house yard grass as thoroughly as I imagine gophers must, if you go by the complaints of U.S. rural gardeners. It doesn’t bother me, as I don’t have a lawn, but a part-mown, part-grazed paddock. I have never seen the echidnas less than about 10 metres apart, and there seems to be no acknowledgment of each other’s presence.

Late one afternoon I spotted one of them standing up to lever the bark off a firewood log. That was worthy of a photo, looking so suddenly tall, an anthropomorphic cartoon character who ought to be wearing a vest. 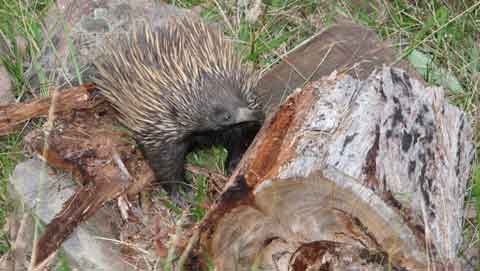 Then I noticed he was rolling the log as he did so, to get it all off and uncover any secretive supper treats. 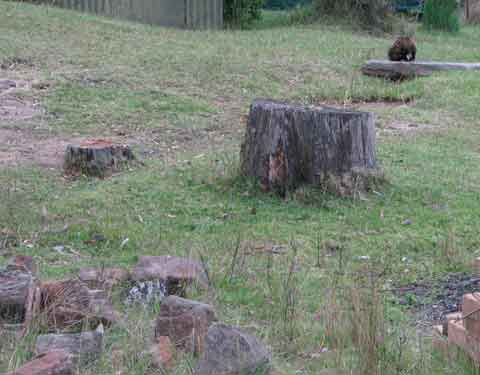 I’d gone up on to the bank above him to get a better view; that’s when I noticed the other echidna barrelling towards us. The wood-echidna (bottom left hand) left his log and began to head out to the open grass.

It was as if he wanted to put the competitor off the track, after all the work he’d been doing to remove the bark. The intruder, undeterred, was making straight for this direction.

I was fascinated to see what happened when they got close to each other. Both moving fast, they passed so close they almost touched, but wood-echidna gave no sign of noticing. Intruder echidna turned its head and gave a perfunctory sniff at the rear that passed by. But that was all.

Hardly a greeting, and total poker-faced bluffing on my wood-echidna’s part. Was it a tacit way of sharing the goodies or avoiding a fight?