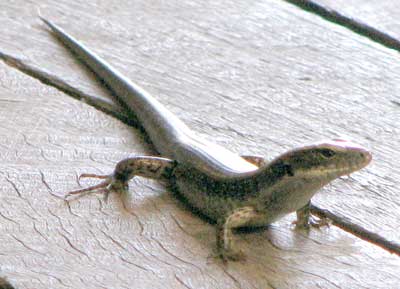 This very sleek and speedy lizard is a frequent visitor to my verandah. At about 180mm (7 inches) long, much bigger than the most common garden variety, he’s probably a Southern Water Skink, but could be an Eastern one. Regardless of his exact title, I know he’s an inquisitive skink.

Often when I’m at the computer I catch sight of him snooping round the corner of the open door, then scurrying in and off across the timber floor, usually disappearing behind my wood ‘box’(actually the liner of an old copper) near the fuel stove.

Occasionally I worry about him being trapped inside when I close the door at night, but I suspect he’s also a clever skink and knows when to make his exit. I just don’t see it.