Sometimes your eyes are drawn skywards by Nature doing the same; sometimes they have to be guided.

Recently I visited some sandstone ridge country, very different from my own, hence a fascinating new world to me.

In one, a beautiful place called ‘Eagle’s Drift’, I was taken to see this massive nest, so high up that I’d not have thought to look. 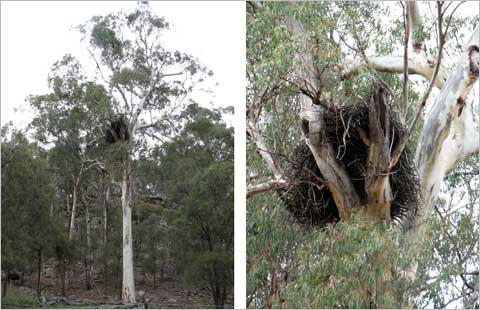 It’s a Sea Eagle’s nest, not made of grass and twigs like the nests I usually get to see, but of big sturdy sticks.  This is nowhere near the sea, but these eagles come up the river, I was told. The White-breasted Sea Eagle is not quite as big as a Wedge-tailed Eagle, but  — as the nest shows — they are big  birds! Males can be about 76 cm (30 inches) and females 86 cm (34 inches).

My bird book describes a Sea Eagle as ‘like a huge stiff-winged butterfly in flight’. The caretakers of this property, which is how they see their role as owners. are so lucky as to see both these majestic large raptors using their airspace  — ‘drifting’ or not. 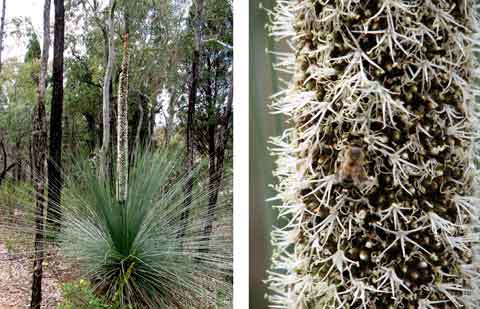 The other vertical that struck me, not far away in the Goulburn River National Park, were the ‘grass trees’, Xanthorrhoea australia, sending their flowering  spikes soaring above their grass skirts. They can reach up to three metres (10 feet).

Many of us don’t catch these slow-growing sci-fi plants when in flower and only know their brown ‘spears’, which were partly why their early common name was ‘Black Boys’. Birds and bees love the nectar in each tiny, spidery blossom.