Last Friday, 1st February, we raced ahead of an impressive storm front that was curving in a pincer shape towards the Maules Creek area.

It was the first time I’d been past the edges of Leard Forest, and I was bowled over by the beauty of this long-established farming valley, with the Nandewar Ranges’ woolly convolutions as backdrop.

The top photo was taken after the storm and its wild winds and heavy rain had passed, and we were driving to the Maules Creek Hall for my talk that night. That’s a PM2.5 monitor in the paddock, wrung from Whitehaven by the Maules Creek Community Council earlier on, as baseline data.

Despite the storm, and the fact that they only had a few days notice of my talk, a surprising number of locals turned up. Some did have to be ferried across the rising creeks and some had to leave soon after the talk or they’d not have made it home.

Of the 50-odd folk who came, I was very pleased to see many with young families. The kids ran about and played outside in true country hall tradition.

I met quite a few local people, including Bruce and Wilma Laird, Phil Laird’s parents, whose ancestors setted here and for whom the forest is named. (They did originally spell it like the forest, said Bruce.) 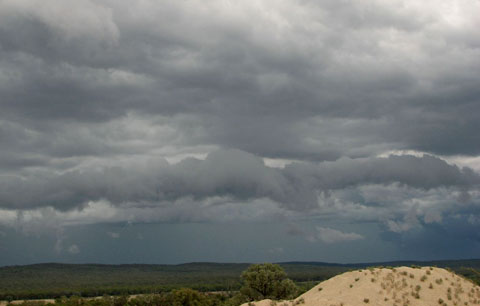 Although the storm had been hot on our tails on the way over earlier, I just had to stop and take photos! This one is looking back to the Forest, with a fabulous dense rolled cloud, called an ‘arcus’, found ahead of a storm, ‘riding on the front of the outflow of cool air’ (The Cloudspotters Guide). 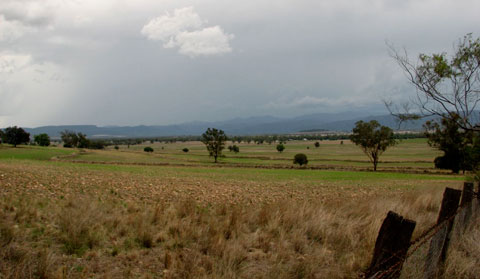 Looking in the opposite direction, towards the Nandewar Range, you get an idea of why Whitehaven must not be allowed to turn Maules Creek into an open cut coalmine! I hope that if Tony Burke doesn’t do the right thing and reject this mine, the locals decide to say NO in the way Caroona did and cause stormy days ahead for Whitehaven.

I’ll go back to join them.

The Nature Conservation Council suggests you call and tell Minister Burke to protect this important natural area from the destructive impacts of coal mining. He’s deciding by Thursday, so please call today! Of course you won’t get him but the message will get through.

3 thoughts on “Storm ahead for Whitehaven?”