Collecting kindling, I happened to walk around the back of the big tree whose roots cradle my ‘insulator’ bird water bowl on the other side.

From the different perspective, the early morning sun illuminated something incongruously light-coloured high up on the rough brown trunk.

It was a fat fungus but I could see little detail until the light was brighter. 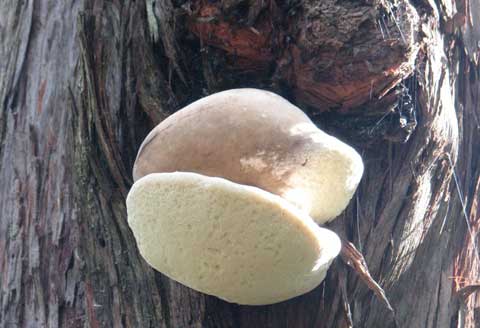 Even then, it was hard to see over the top of it, and what I photographed didn’t match anything in my fungi books.

Luckily I knew where to go: Gaye’s fungi blog. I looked down her list of fungi by colour. ‘Beige (without gills)’ I thought was a good bet.

And there it was:

‘Laetiporus portentosus, commonly called White Punk, forms large, thick brackets on living Eucalypts. It causes white heart-rot to the host tree… Brackets can reportedly reach 350mm wide… The upper surface of the fungus has a slightly ‘velvety’ texture and can be off-white, beige, to a warm ‘biscuit’ brown colour — the pock-marked under-surface is riddled with tiny larvae’.

There’s more on her site — Gaye’s knowledge is first-hand, first-rate and a boon to people like me who are interested but not very informed.

I am a little worried about the ‘heartrot’ she mentions, given that this tree is already host to a few young Native Cherry (Exocarpus cupressiformis) trees, which are parasitic on the roots. 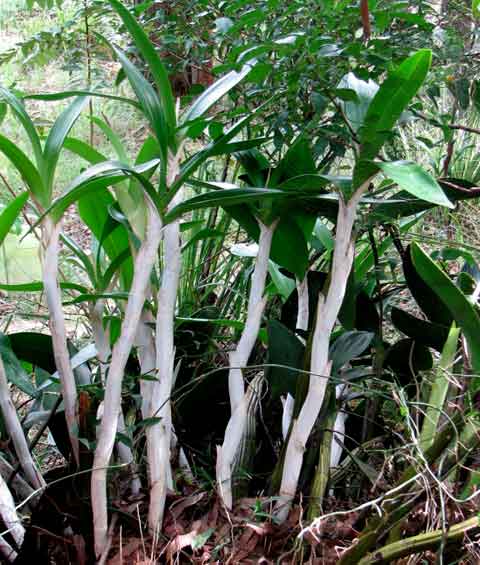 However, while I was around this rear side, I saw a fresh view of one tree dweller that won’t be harming it.

The orchid buds that I photographed at its base not so long ago have shot up into leggy adolescents, sheathed in white silk.

Nature is full of surprises.