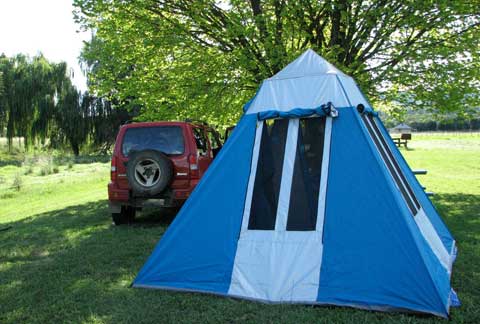 I’ve been on the road a bit lately, researching for a book.  It means I get to use my cute little tent, camping in new places. I do like the freedom of being able to stop as and where I like — affordably.

My first night was spent at Coolah, where for $7 I got a great camp site, access to a campers’ kitchen and clean amenities with hot showers. Plus the shade of a beautiful spreading tree, which was very welcome as I sweated and struggled to erect the tent in the late afternoon.

Camp set up, glass of wine in hand, I began to look more closely at my surroundings.

There were willows by the creek, and cows — and a bull — in the adjacent paddock, separated from me by a single wire that I assumed was electrified.

I don’t have much knowledge of introduced trees, and was wondering if the beauty under which I sat was an elm, when I noticed some seed pods suspended within reach. Might be nice to grow a tree like this at home! 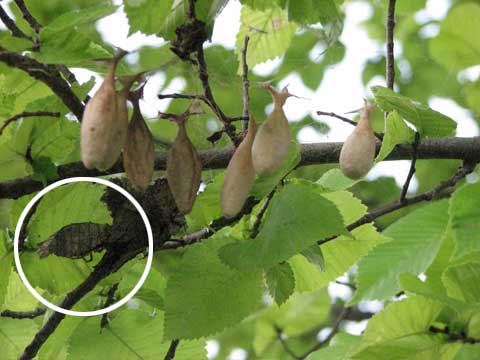 They seemed to be the only ones on the tree; luckily I refrained from picking one long enough to realise they were not seeds. Like Indian clubs, these smooth creations were hanging from a criss-cross of spider webs.  I could just see the spider’s legs protruding from its dry leaf shelter (circled).

Once home, my I.D. attempts tell me this is a Bolas spider. The egg sacs are described as being like spindles, but the photos show them to be as rounded as these. Given that the egg sacs were about 50mm long, I was surprised to read that the spider is small — the female is 12mm and the male 2mm!

If you want to identify that spider, the Findaspider website is the place to visit.