I have an old wooden stepladder that I keep in the shed. Last time I used it was to trim the ornamental grapevine on the verandah.

The other day I fetched it and placed it under a grey gum where I was mending a swing. Perhaps an hour later I went to fold it up and return it to the shed.

That’s when I noticed the bit of woody vine tendril stuck on one corner of the top step. I went to flick it off — but then it moved. It looped its way along the step, such dressed timber not allowing it to be as well camouflaged as it ought.

It had bark-like patches and twig-like knobs; it was beige and brown and grey, with tinges of pink and green — just like a living twig. An amazing little creature. 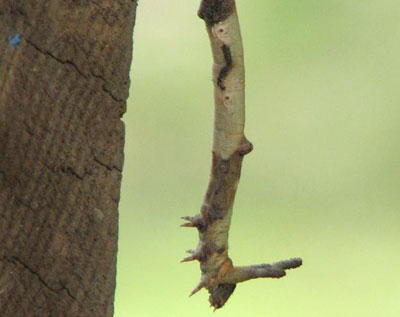 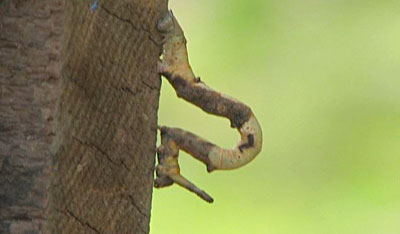 When it raised its head to suss out where to go next, it was almost rabbit-like with such thick antennae and a sloped face; but the rest of it was more caterpillar-ish, with three pairs of feet at the front and then a long stretch — the loopy part — before the end, where there seemed to be several pairs of feet separated by a sort of velcro gap.

But I could only catch glimpses of this occasionally; I could have sworn I saw blue under there — blue velcro? Or had its velcro picked up one of the very rare dots of old blue paint from the ladder?

It would appear to be a caterpillar of some moth of the family Geometridae, according to my Animals in Disguise book by Paul Zborowski.

I said it ‘looped’ along, but I could have said it inched along. Not surprisingly then, their common names are Inch Worms or Loop Caterpillars.

I could only assume it had fallen from the branches above; when I placed it on the rough bark of the trunk, it stood out straight like a twig, but soon dropped to the leaf litter at the base, where it looked much more at home. Just look at those markings!