Brown is not a favourite colour for me; I never wear it. I don’t even particularly like chocolate.

My dad — and many others — was fond of a paint called Mission Brown. He also grew beans for market, of a variety called Brown Beauty, which I was allowed to help plant when I was little, and felt obliged to help pick when I was older.

Lately I have seen some fungi that could come under the category of brown beauties.

These little helmets shot up in the leaf litter of a non-indigenous tree by the Goulburn River. Two days later I went back to see how they had opened but  they had disappeared, eaten I assume. Cappuccino brown, with an overly-eager barista shaking the chocolate over the centre, leaving the frothy edge untouched?

As for their name, I can’t say, given they didn’t open — but at a guess, Macrolepiota clelandii?? 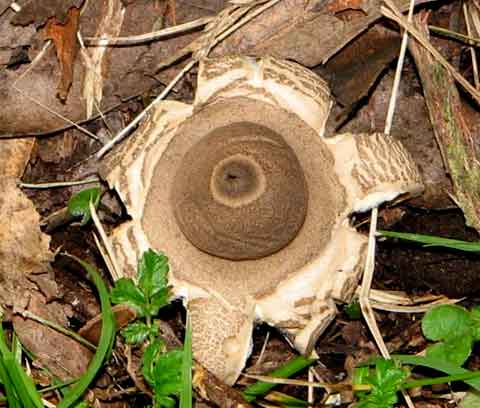 Back home, with 295mm in the rain gauge, I’d say it’s been pretty wet. The perfect time for this solitary little Earth Star fungus, Geastrum triplex, to appear.

They depend on raindrops for spore dispersal, the downwards sloped rays of the star increasing the chances of the central ball getting wet. Not that with 295mm it had much chance of being missed!

A Field Guide to the Fungi of Australia by A M Young describes an event I’d love to see:

‘Large, mature colonies of this species can be spectacular in light showers of rain; the falling raindrops produce an obvious cloud of ejected spores floating in the air several centimetres above the colony.’