While the Woko rainforest may be green, slow walkers and careful lookers can spot dashes and spots of colour as the fungi which love rotting wood and leaves display their amazing variety. 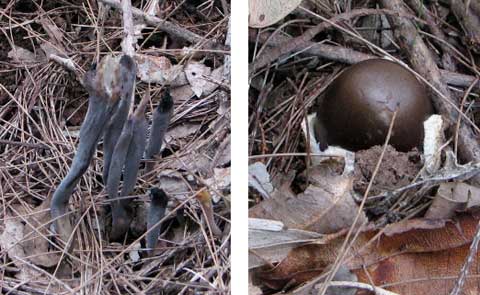 I almost missed the strange grey groping fingers of what I think may be Clavaria zollingeri (left); another pointed out this solitary perfect dark chocolate sphere in its cracked wafer shell, which I first took to be some sort of Earthstar but think may be Scleroderma polyrhizum, although very dark? 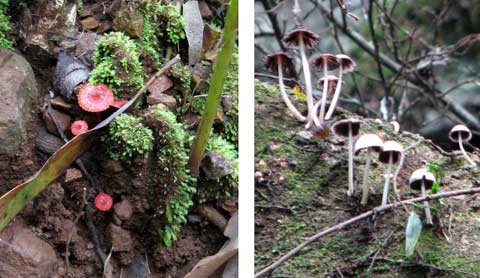 And then there were the pretty ‘fairy’ sorts of fungi, like these mini red ‘parasols’, which I didn’t check if they were velvety or slimy, so could be Hygrocybe miniata or Mycena viscidocruenta? I must take the fungi book with me on such trips!

The elegant beauties on the right were growing on a fallen log high up in front of the waterfall; no idea what they are and I guess you wouldn’t normally be looking up into them. 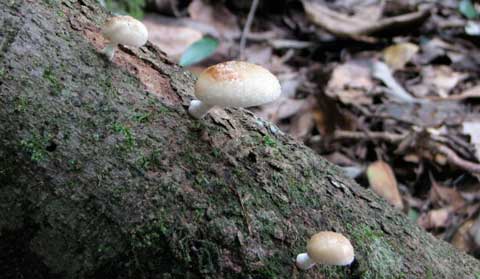 This unknown creme caramel trio took my fancy because they were so determinedly offset, trying to keep their caps level — caps which were definitely slimy —  ‘viscous.’ 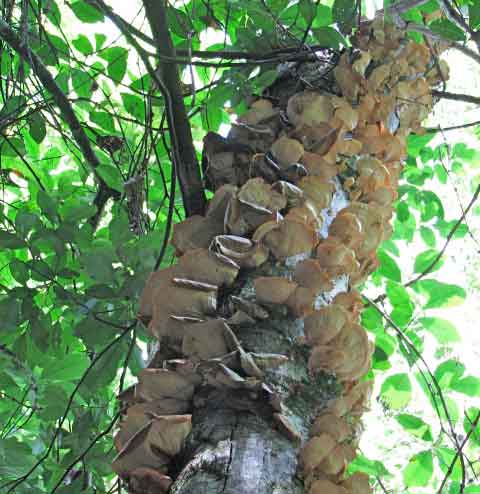 This enormous colony seemed to be dying, as the host tree already had; half of the trunk had snapped off and lay on the forest floor, where the delicately flushed fungi fans were turning dark and papery. This reminded me of marine platform rocks covered in shells, so dense was the population.