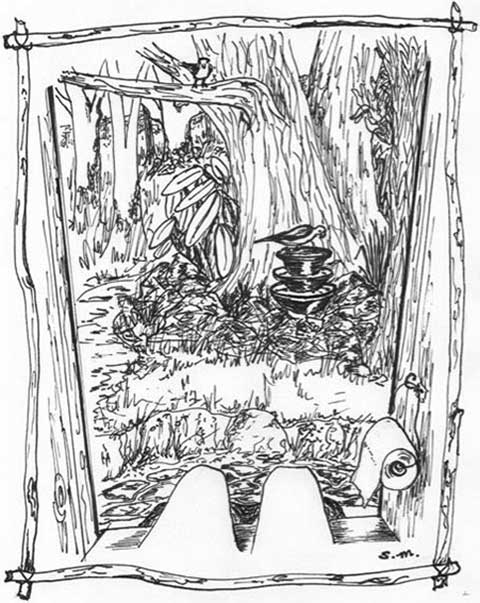 The sun on your knees, a view of birds and bush… who’d want an indoor loo? This sketch and extract is from The Woman on the Mountain, Chapter 14, ‘The Simple Life’.

‘Contrary to popular mythology, the simple life is not found in the country but in the city, where you simply pay your bills and press a button for everything you need, and you don’t have to know how any of it works or be able to fix it yourself.
…
‘My next self-sufficient system is sanitation. I have what is called a ‘long drop’, a big hole in the ground with my old jail’s lidded seat over it and a shelter shed over that. It was originally a metre-cubed hole, dug into bedrock with pick and crowbar in 1978. I’d assumed it would last a few years, but it’s still going. Beside the seat is a lidded enamel canister which officially says SUGAR, but as nobody takes tea there I think it’s safe from confusion with my Texta-scrawled LIME. A sprinkle of the latter now and then is enough to keep the material breaking down, while an evaporation pipe dries it out and reduces the volume.

I always thought I’d build a dry composting toilet one day, but the only real difference from my current one would be that I’d get to use the resulting compost.

A few overly civilised visitors have had difficulty using my sanitation arrangements. I’ve never asked whether this was from the dark pit yawning beneath them or the idea of communal storage, but the ensuing psychosomatic constipation was real. They couldn’t wait — or rather, they could — to get back to a proper flushing loo. I feel sorry for them, so unable to accept that they’re part of the animal world, with the same basic processes necessary for survival. They were possibly also uncomfortable without a door to shut, but the toilet faces away from the house, and they wouldn’t see the birds and trees otherwise.

Having grown up with a pan toilet — a far-too-short drop — I consider mine quite manageably distant and salubrious. That toilet, complete with harsh and unabsorbent newspaper squares impaled on a large nail, was dark and spider-scary because it wasn’t done to leave the door open; and smelly, often maggoty, because it was never emptied soon enough. When Dad worked away from home for a month once, Mum and I had to do it, and I understood why he’d kept putting it off. But that first row of orange trees, in the burial range, had the glossiest, greenest leaves, and the biggest, juiciest fruit, of all the trees in the orchard.

The disadvantage of my toilet is that it’s a fair hike up the hill when you’re in a hurry or it’s raining. If the pit ever does fill up, I’ll build the new toilet on the flat, still outdoors, perhaps reached by a covered walkway. And I’ll plant an orange tree on the old site.