There’s little flowering right now in my forest, but this pink one caught my eye. Hadn’t seen it before, and there was only one.
So, naturally, I got the camera and went closer. 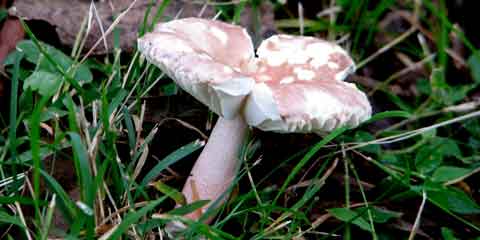 Which is when I realised it was a fungus, fleshy rather than flowery, fat-stemmed, the cap splitting into ‘petals’, lightly frilled, with a gill-fluted white petticoat.

And I have tried to find out what it could be called, but failed. Neither my books, nor Gaye’s Fungi site, nor the web, have revealed its identity.

One of the mysterious aspects of fungi is how a single specimen can appear, delight and confuse me, and disappear, never to return in that spot– or not for the decades I’m around.