I was thrilled as the lone White-headed Pigeon became three; and then five. And some kept revisiting, to peck/sip the water from the concave top of my cabin water tank.

But this week, the number of tapping pecks and the flurries of wings seemed more than even five could make. 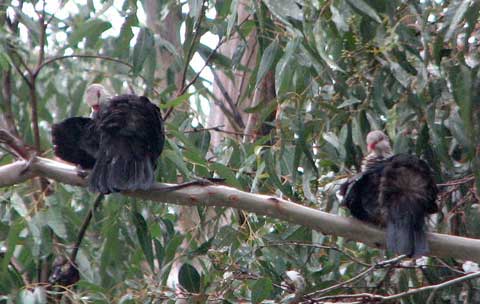 I looked out through the window, to see three surveying the world from the tank, and two others preening and fluffing their tail feathers in a nearby tree. Equals five.

I walked out on to the verandah to get a better shot, and couldn’t quite believe what I saw. Pecking and poking about on the track above the tank were lots more pigeons, including several of the greyer, duller-plumaged females.

Counting and re-counting as they pottered about, I can swear there were thirteen, although they were too spread out to capture in one shot for you.

I am over the moon with gratitude that the advance party decided it is safe at my place for the whole flock to visit, even the ladies.