When you get to a camp spot late in the day you don’t have time to look around much, beyond finding a flat spot for the tent, setting it up and scavenging leftover firewood at cold campsites.

I saw enough of Lime Bay, in the State Reserve near the northern tip of the Tasman Peninsula, to know that I wanted to be up early next morning to make the most of the time I’d have there.

When I woke, it felt far too cold to get up. But I unzipped the tent enough to see swans and this slow sunrise dawning. Not too cold after all. 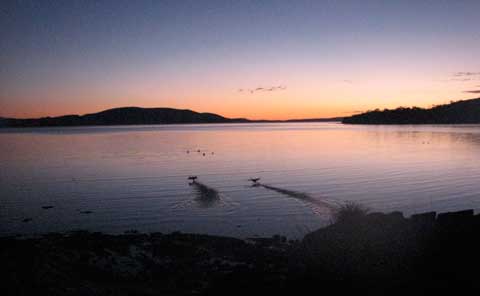 I had learnt that sunrise takes a long time in these latitudes. Gloved, hooded and many-layered, I sat on a rocky point above the low tide and watched the other early birds, like the swans skimming the water in a slow take-off towards the sunrise.

I have never had the chance to observe black swans, so I had no idea until now that they wear white petticoats.

A solitary seagull floated over the gently rippling bay, whose colours changed more noticeably than the sky seemed to, picking up bronze in long smooth reflections amongst the silver blue of the broken water.

But the sky was changing, the indigo lightening to a more daytime blue, the peach skyline gaining a red blush, catching fire in the Bay. Only the land remained in night-time black.

Then the event progressed with a rush as yellow arrived, overwhelming the peach, turning the blues to purple. I hardly had time to take note of its aspects before the sun rose over the point. 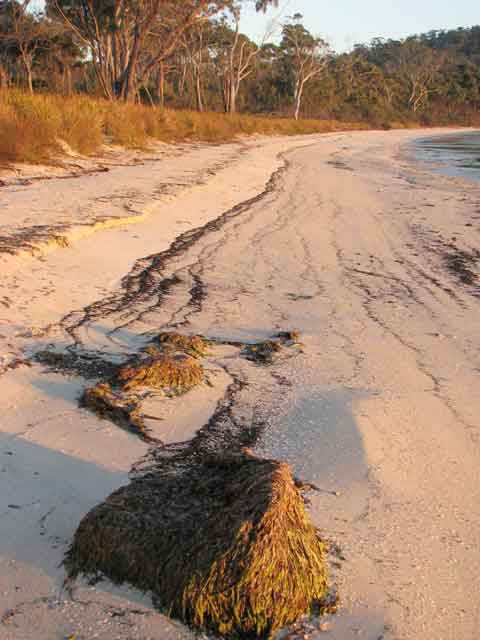 Then the land was lit up as if by firelight; the tree trunks, the grass edge, the beach with its strange mounds of seaweed like stranded Pekinese and its long seismograph frills of black lace.

The millions of tiny shells that comprised the lower edges of the beach were glowing as I crunched along, not wanting to spoil the sand with footprints.

My feet were numb, but Lime Bay was more than worth getting up early for.