Just before Christmas the battlers for the village of Camberwell were given the most wonderful cause to celebrate.

They learnt that the Chinese Yancoal’s proposed Ashton South-East open-cut coalmine had been rejected by the Planning Assessment Commission. (Picture by Simone de Peak, Newcastle Herald)

It would have taken all Wendy Bowman’s  (left) farm and caused Deidre and Toby’s Oloffson’s (centre and right) Camberwell village home to be unliveable. (See my post Camberwell — in crisis from coal)

Potential damage to the alluvial systems was a major reason — as Wendy had been saying forever! — and the NSW Office of Water stood its ground against the government’s urging to have it approved.

The NSW Department of Health also stood firm, saying it would create unacceptable cumulative impacts on the health and wellbeing of the residents. Ashton knew this as they had offered to move them out for seven years!

So it seems to me that, just as the people spoke out at the Planning Assessment Commission hearing — and protested outside  — the bureaucrats are speaking up for common sense and long-term vision in planning, and for caring for the community. 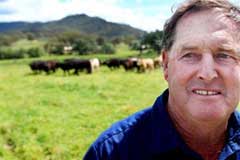 Add to that the victory for the Moores (See my post Bullying the blind?) when NuCoal withdrew from any exploration drilling on their farm, (Picture by Ryan Osland, Newcastle Herald) and it seems that people power is emboldening the public powers to voice the truth, regardless of pressure for royalties.

Dare we hope for glimmers of sanity in decision-making in this state, for more inappropriate mines — and there are plenty in the offing — being rejected in 2012?