Being bordered by a forest on two sides means I have great close-ish views of many birds.

I hear and see kookaburras quite often, usually in ones or sometimes twos.

This pair were on lookout duty in a large camphor laurel tree.( I have planted a small self-sown strangler fig at its base, hoping that one day native Nature will win.) 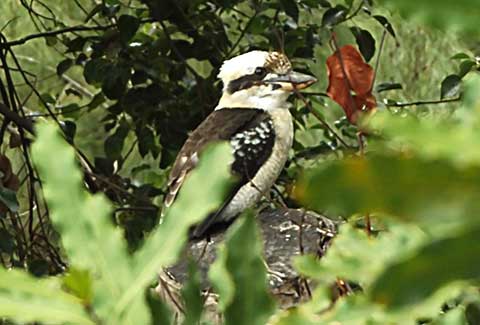 Then I noticed a third handsome kooka on a lopped arm of a different tree nearby. It seemed to have something in its beak, but which looked more plant than animal, a stem perhaps, mistaken from on high for a worm. 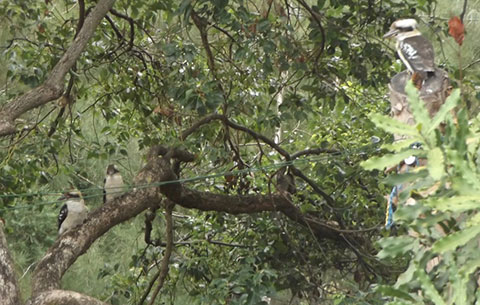 I don’t know if a trio constitutes a colony (I just like alliteration), but I’d say it’s at least a family.

I wrote about them in my first two books, and drew one, a fellow Mountain resident, in Mountain Tails.

Here’s an extract about kooka families from that chapter, ‘Kookaburra kingdom’ 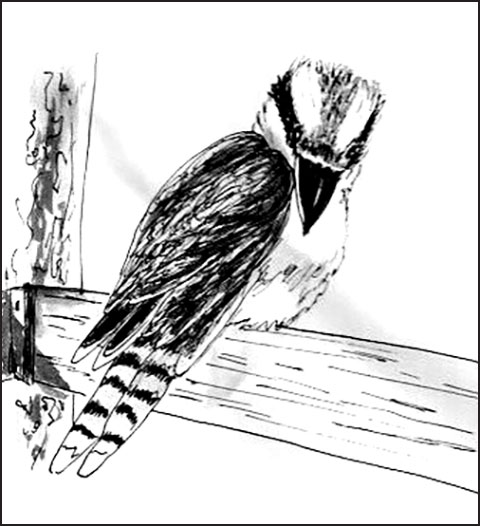 I’ve learnt that Laughing Kookaburras live for several decades and are stay-at-home family birds, partnering for life and keeping their offspring around them in large family groups, where all the older ones help their parents raise the nestlings.

Human families used to do that in the pre-Pill days when four kids was the norm; six and up if you were Catholic, obeyed the Pope and relied on the unreliable rhythm method; two was unusual, a bit sad, given that there must be a physical reason why you’d stopped there; and the rare only child and its parents were much pitied. Bogging in to help feed the littlies, wipe their noses, find the other sock, tie their shoelaces or keep them away from under Mum’s feet was the accepted cross of being older, just part of family life.

As kookaburras haven’t heard about the Pill, things haven’t changed for them. My head knows that those morning and evening kooka choruses that echo around the ridges here are to help the different family groups re-establish their territorial boundaries, like auditory suburban paling fences. Yet my heart says they also do it for sheer joy, since their performance is so wholehearted, beaks pointing skywards, throats vibrating, as they sing the daylight in and out.