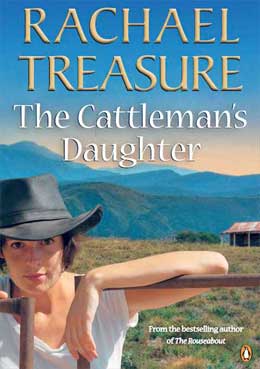 I have just read Tasmanian writer Rachael Treasure’s new book, The Cattleman’s Daughter. To my mind it’s her best book yet, with clear signs of the maturing writer as well as woman.

Like all Rachael’s very popular books, it has a central developing love story and lots of horses, but of equal importance here is the surrounding drama — the forced ending of traditional grazing in the Victorian high country. Rachael knows the High Plains and these people well and draws a sympathetic and vividly realistic portrait of the country, their history there and love of it, and their ways and attitudes.

She is not so kind to the bureaucrats who make such decisions without any connection to that land, or consultation with those who do have it, regarding the solution to a perceived problem. She puts clearly the graziers’ concern for who then cares for such land regarding fire hazard reduction and weed control, when the new ‘owners’, the government, provide little or no extra funding for staff to replace them.

At first, as both a farmer’s daughter and an environmentalist, I worried that the two sides would be stereoptyped into goodies and baddies, as I met extremists like the inner-city greenie, Cassie, and the ignorant and power-drunk bureaucrat, Kelvin. But Rachael also gives us Bob, a reluctant cattleman who does not care for his land at all. In between we have the commonsense types like the heroine Emily and her love interest, Luke, who has just taken a job with the opposing side, a government department with a very long name, but equivalent to what used to be in charge of national parks.

Emily and Luke are both credible, well-rounded and likeable characters, and there are delightful minor characters like Emily’s rough Aunt Flo, her admirer, Baz, and Emily’s transformed old schoolfriend, the voluptuous hairdresser, Bridie.

There is plenty of emotional depth and drama — including a horrifically real bushfire episode that I could taste and smell and choke on — and lots of humour, and of course, the frank and sensual sex scenes which are the due of any Rachael Treasure heroine.

But this heroine is different; Emily is married and has two daughters.

There are psychic elements in this book that may surprise RT fans, but, as with the more serious wider subject matter, I think she will take them with her into this enriched field of rural life. Who knows where this maturing writer will take them next?

And I’m betting there’s a film to be made of The Cattleman’s Daughter; think a modern, raunchier Man from Snowy River, with the baddies in official 4WDs, but with those same great settings and wild horse rides.

2 thoughts on “The Cattleman’s Daughter”