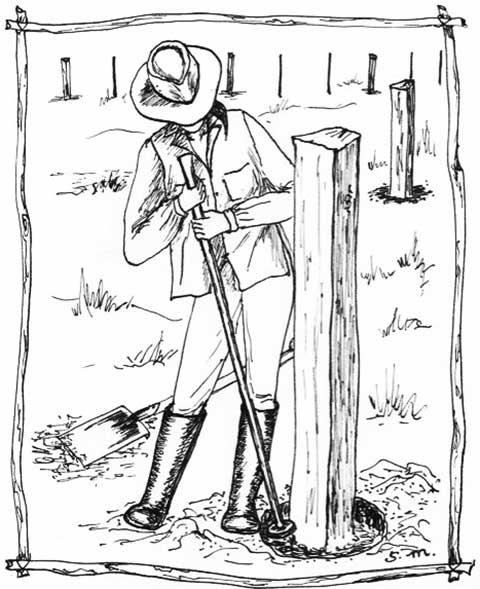 This drawing was meant for Chapter 12 of The Woman the Mountain, ‘While the woman’s away…’ which is mainly about the wildlife moving in and taking over when I wasn’t there.

When the rain finally stopped, I began fortifying the fence against the wallabies, slowly and erratically, depending on when I could afford another roll of chickenwire. As I clipped it on to the old hingelock netting, I was forced to get up close and personal to the past.

I’d erected this house fence ten years ago, when I came back to live here. My dream had included a large garden in the midst of the regenerating bush and its abundant — and voracious — wildlife. That required a netting fence. As my partner was already engrossed in his creative and income-earning pursuits — absolutely single-mindedly, as many men can be — I did most of it myself. I dug the holes and tamped around the wooden posts with the head of the crowbar, which isn’t easy to do on your own and still have the heavy posts end up roughly vertical. A fair bit of boomps-a-daisy balancing was needed.

In between the wooden posts I banged in the steel star posts with my wonderful ‘putter-inner’, a heavy iron cylinder, closed at one end, that a friend had welded up for me. The shop ones, called post-drivers, have handles, and I suppose they are all bought by weak women — Real Men use iron mallets that I can barely lift off the ground, let alone above my head.

And I’m no weakling, despite being small. But some jobs don’t only depend on strength. They’re just bloody impossible without the right tool — like my ‘puller-outer’, a shop-bought manual post-lifter, which makes removing star posts and tomato stakes amazingly easy, and which, I suspect, even Real Men might use.

These are the sort of tools I love: dead simple and very effective, requiring neither mechanical knowledge nor great strength, needing no manual, using no fuel, hiding no spark plugs, able to be forgotten and left out in the rain without damage, enabling little me to do heavy work. In fact they’re the sort of old-fashioned items that are usually discontinued nowadays — too simple, too enduring, a one-off purchase that brings no economic and ongoing joy to anyone but the buyer. What a useless thing to keep manufacturing!

Posts all in, my partner strained up several strands of plain wire for me to attach the hingelock to, as I can’t seem to get into my head how to set the chains and teeth of my fence strainer so it works. Or perhaps I’m just scared of the way it bites and snaps and strains almost to breaking point.

Then I unrolled the old hingelock netting, relic of my first dream of a bush life seventeen years previously. My then husband and I had fenced in several large areas for vegetable gardens, since we thought we’d grow fancy foods like globe artichokes and asparagus — and back in the 1970s these were fancy, rarely seen in shops. After the marriage broke up, so did the fences, only more slowly.

2 thoughts on “Woman at work”